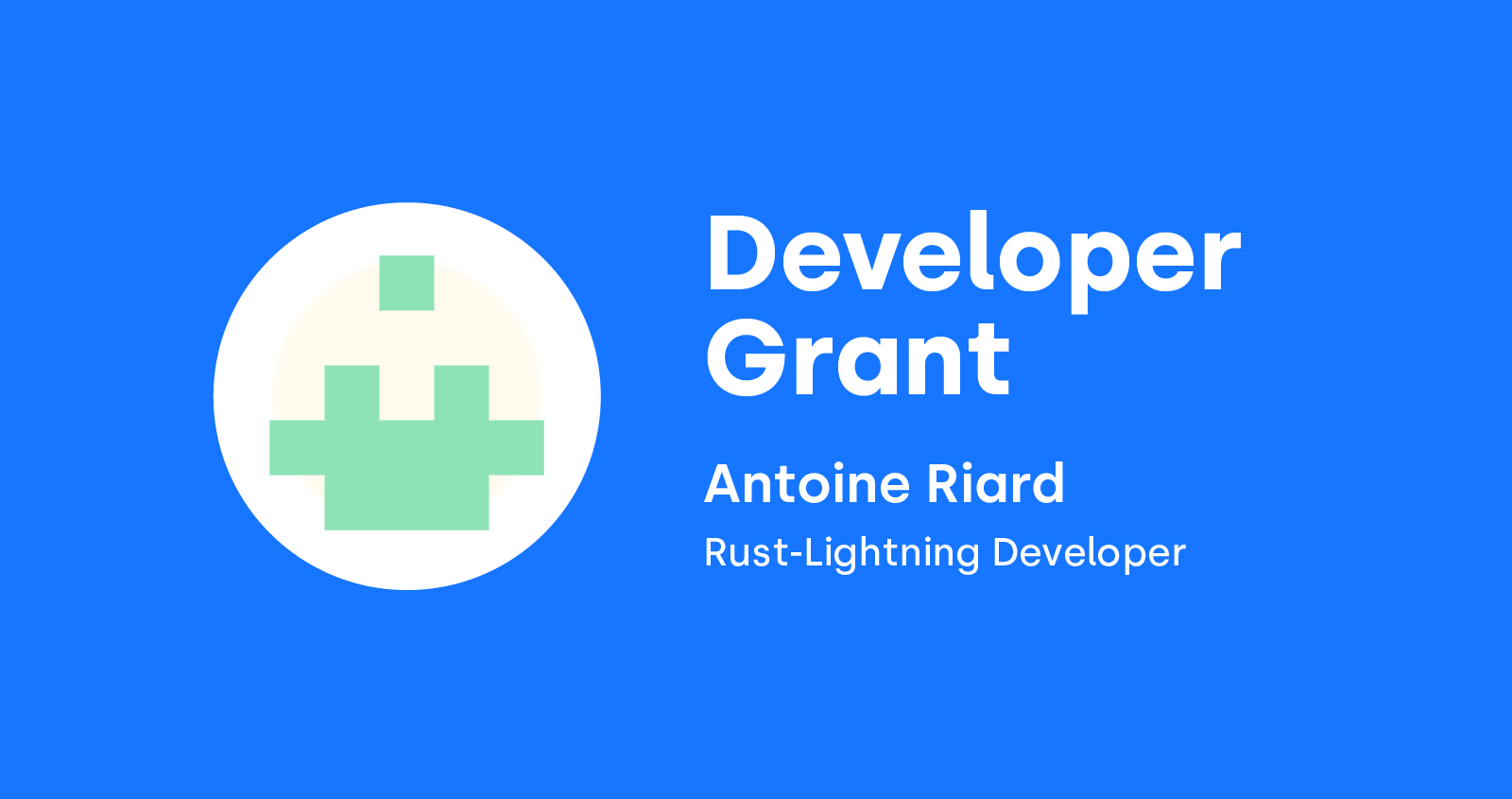 As part of our ongoing efforts to support the Bitcoin ecosystem —  as well as in line with our integration of the Lightning Network today — we’re happy to announce that Antoine Riard has become the latest recipient of an OKCoin Open-Source Developer Grant.

Antoine is a Bitcoin core and Rust-Lightning developer. His focus addresses security flaws in the Bitcoin protocol, with a primary focus on off-chain protocols like Lightning. He also focuses on building the Lightning Development Kit project, initiated by Square Crypto.

With this most recent grant, which will support Antoine’s development work over the course of one year, OKCoin will have provided over $500,000 to open-source Bitcoin development. In addition to the grant announced today, we’ve supported Bitcoin payment processor BTCPay and individual contributors Fabian Jahr, Amiti Uttarwar and Marco Falke.

We spoke to Antoine about what brought him to Lightning, and why he sees the protocol as a “financial highway” and “the future of Bitcoin.” You can read our full conversation below.

OKCoin: Why did you choose to focus on the Lightning Network in particular?

Antoine Riard: When I got started in Bitcoin development almost three years ago, it was where you really had the hottest changes, and, in my opinion it’s the future of Bitcoin. There’s a huge space to explore and lots of potential in this protocol.

On the Bitcoin base layer, you have a lot of changes too, but it’s already more mapped. But in Lightning it’s a blank page — or almost a blank page — so it’s more exciting.

Also this whole idea of having counterparties talking to each other in private contracts on top of the blockchain is fascinating.

OK: You’ve mentioned before that you like that Lightning has a very modular code base.

AR: Lighting is the future because it’s going to be like financial highways. Right now we are building the highways, making sure it’s going to be secure and stable at scale, when you start to put real money on top of it. In my opinion, of course you have the base layer, but Lightning might be this small piece of infrastructure for the whole Bitcoin side.

So we have to get it right if we want to build more stuff on top of Bitcoin.

OKCoin: Why do you think Lightning is the future and essential to Bitcoin’s growth?

AR: It depends on how you define Bitcoin’s success. I would say Bitcoin is already successful as a store of value, as people use it, and as a payment system in some parts of the world.

But first of all, it’s going to change, as we see new entrants into Bitcoin, like mempools. And you’ll have a fee bump, and a lot of people might not be able to use Bitcoin as a payment system and they’ll have to use Lightning or something equivalent.

If you want Bitcoin to be like real money, and not only like digital gold, but like any ordinary money, something that is used by people in their everyday life, Lighting is the way forward for sure.

Again, I would say Bitcoin is already successful. Will Bitcoin survive without Lightning? Yes, I think so. It will be alright, for sure.

OKCoin: We announced that we’ve integrated Lightning on OKCoin today. Is Lightning ready for mainstream exchanges and other business integrations?

Just think about the state of Bitcoin in 2014 or 2015, and that’s about where Lightning is age wise.

We need more people in it though. Some changes you only discover when you throw people at the protocol and see what happens. But it’s too early in my opinion, it’s really early.

OKCoin: so we’re a first mover in that sense, we’re one of the first crypto exchanges to integrate Lightning…

Lighting is ready for these big payment channels between exchanges, because it’s with a known entity and you do have this trust or reputation element playing. But I wouldn’t advise opening a big Lightning node with a lot of unknown people.

OKCoin: What are the major obstacles for Lightning to get to that next stage of growth?

AR: Mobile, make it easier to build mobile wallets. That’s pretty much our focus right now with the DK [Development Kit]. Because the network is growing and consuming more resources from mobile clients, so you do have to find new solutions.

We can also do better on privacy, there’s a lot to address there. Security infrastructure, for sure. Solving the main security flaw that we’re aware of.

I think to be a Lightning node, you need more specific infrastructure, and it’s not really there yet. We’re trying to develop new stuff from the DK side, but it’s ready yet.

OKCoin: It sounds like there’s a lot more needed to bring more app developers in, since there’s just not enough documentation…

AR: In my experience, more developers for sure, but also having the ones who are already present working better together. We do have a hard time on the Lightning side coordinating between the different team implementations because we have different priorities. And not being able to meet in-person over the last year, we experienced our work moving slower, especially on the security side.

There is a general concern of how do you make developers work better together and how do you pass knowledge between different generations of developers. And the thing is, it’s becoming more complex.

I would say if you want to be a good Lightning developer, you should understand the Bitcoin base layer first.

There is a risk of people in the different development communities not talking to each other. That’s something we should care about, in my opinion/

OKCoin: How can the community or businesses like OKCoin help connect more developers? Something like a hackathon, for example.

AR: A Lightning hackathon is a great initiative. I would say we need more initiatives in geographic areas where there are currently fewer Lightning or Bitcoin developers. Most of the developers are American or European, so you do have great Bitcoin conferences in London, or in Berlin, or in the U.S. But people are not trying to move those conferences outside of the Western world. I think that’s something we should think about. To Asia, South America, Africa, India — that’s where we should do big Bitcoin conferences. Instead of staying in San Francisco, or  New York, or London, etc.

We need application developers that both understand Bitcoin and understand the local market. Don’t expect European entrepreneurs or European developers to understand well how people are thinking about money in Africa or Asia.

OKCoin: What is your focus in terms of Lighting security?

AR: For security, Colin Harper wrote an article about it three or four months ago. The good news is that we are making progress now. It would be great to have more developers focused on watchtowers.

OKCoin: Where would you hope to see Lightning in a year?

I hope we’ll have trained a new generation of Lightning protocol developers.

Learn how to use the Lightning Network with OKCoin for faster and cheaper Bitcoin transactions.

Disclaimer: This conversation has been edited and condensed for clarity.

Looking Back: One Year of Funding Bitcoin Development

A retrospective of our initiative to support independent Bitcoin Core developers; our learnings and the future of Bitcoin funding It’s be...

How BTCPay Server is Building the Bitcoin E-commerce Infrastructure