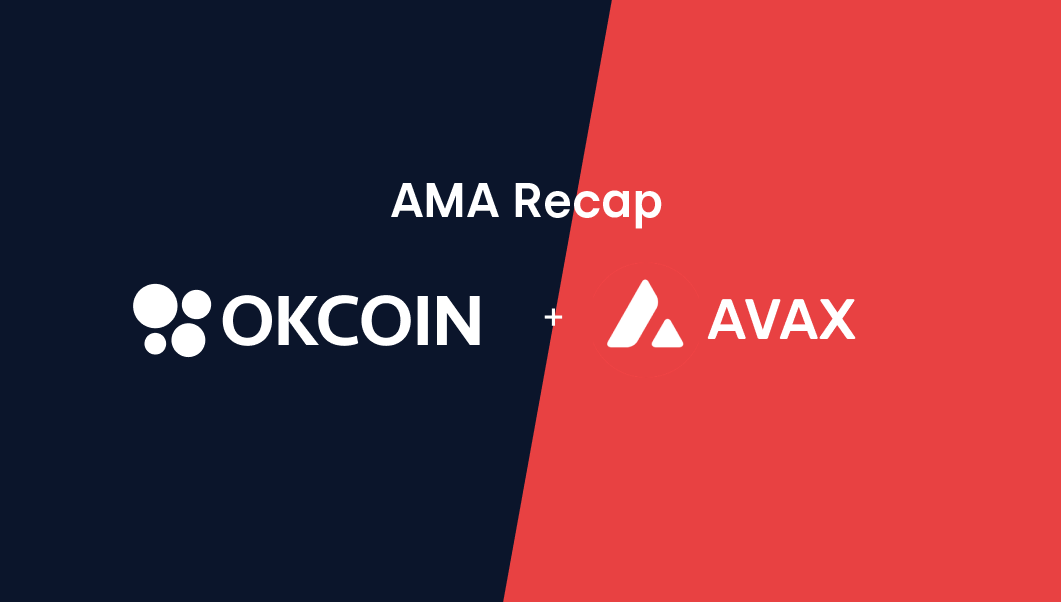 Earlier this month, soon after we became the first United States-based exchange to list Avalanche’s native crypto asset AVAX, we sat down with the team behind the project for an ask-me-anything. Responding to questions from the OKCoin and Avalanche communities, OKCoin COO Jason Lau and CMO Haider Rafique chatted with Ava Labs president John Wu,  VP of business development Lydia Chiu and VP of marketing Jay Kurahashi-Sofue about DeFi, Avalanche and Ethereum, and the protocol’s unique way of approaching decentralized consensus.

To listen to the full conversation, check out the AMA video:

Below are the highlights from our talk with Ava Labs.

“Everything you can do on Ethereum right now, you can do on Avalanche,” Ava Labs’ Lydia Chiu explained during the AMA, addressing a common question in the community when looking at emerging smart contract-enabling blockchain protocols. She explained that Avalanche is differentiated from other decentralized blockchains by its eponymous consensus mechanism. It’s a “brand new innovation in consensus protocols.”

Chiu laid out the history of various models of consensus, dubbing the type of decentralized consensus implemented by Bitcoin and many other cryptocurrencies “Nakamoto consensus” after Bitcoin’s pseudonymous founder.

Scalability remains a huge topic in the decentralized world. This is especially the case for Ethereum, as it implements a major network upgrade that will change its consensus model and demand for the platform continues to grow with the surge of interest in decentralized finance. Addressing problems with scalability, Ava Labs’ Jay Kurahashi-Sofue brought up the need for interoperability between different smart contract-enabling blockchains, as more alternatives to Ethereum emerge:

Ava Labs’ John Wu also added his belief that “there will be a multi-chain world” eventually, meaning there doesn’t need to be only one dominant smart contract blockchain, but different alternatives can exist and allow for interoperability between each other.

Referencing the Avalanche blockchain-based version of Tether (USDT) and USD Coin (USDC) — both of which are integrated on OKCoin — Ava Labs’ Chiu explained the importance of stablecoin adoption for the growth of the DeFi market:

“For the growth of DeFi, as we’ve seen on Ethereum stablecoins have played a really critical aspect driving that growth. Having a good selection of stablecoins on Avalanche, being deployed natively, will also drive that growth as well, because we have to have the pieces to support that ecosystem. In addition to USDT, we’re working with several other projects to bring them on board and there’s been a lot of interest.”

Ava Labs’ Wu also added a teaser: “You’re going to see four of the top five stablecoins announced in the next month-month and a half [on Avalanche]”

Staking is a critical part of the security and functioning of the Avalanche ecosystem and a major potential advantage to Avalanche HODLers. Members of the Avalanche community can stake their AVAX and earn rewards for doing so. As a delegate, the Ava Labs team explained, you simply hold AVAX and stake it on the protocol by entrusting it to an existing node in the network.   A more complex way to stake AVAX is to become a validator, which means you actually run your own node on Avalanche.

During the AMA, the Ava Labs and OKCoin teams revealed that AVAX staking will soon be available on OKCoin, which will provide a simple way to stake AVAX. OKCoin customers will be able to buy AVAX with USD on OKCoin, and then deposit these AVAX on OKCoin’s Earn tool to start staking and earning rewards.

How to stake DOT and earn passive income on Earn

An introduction to Polkadot and DOT, plus a guide to staking DOT to earn daily crypto rewards. As of today, March 31, you can start earni...