Protecting Bitcoin — why we’re removing BCH and BSV from OKCoin 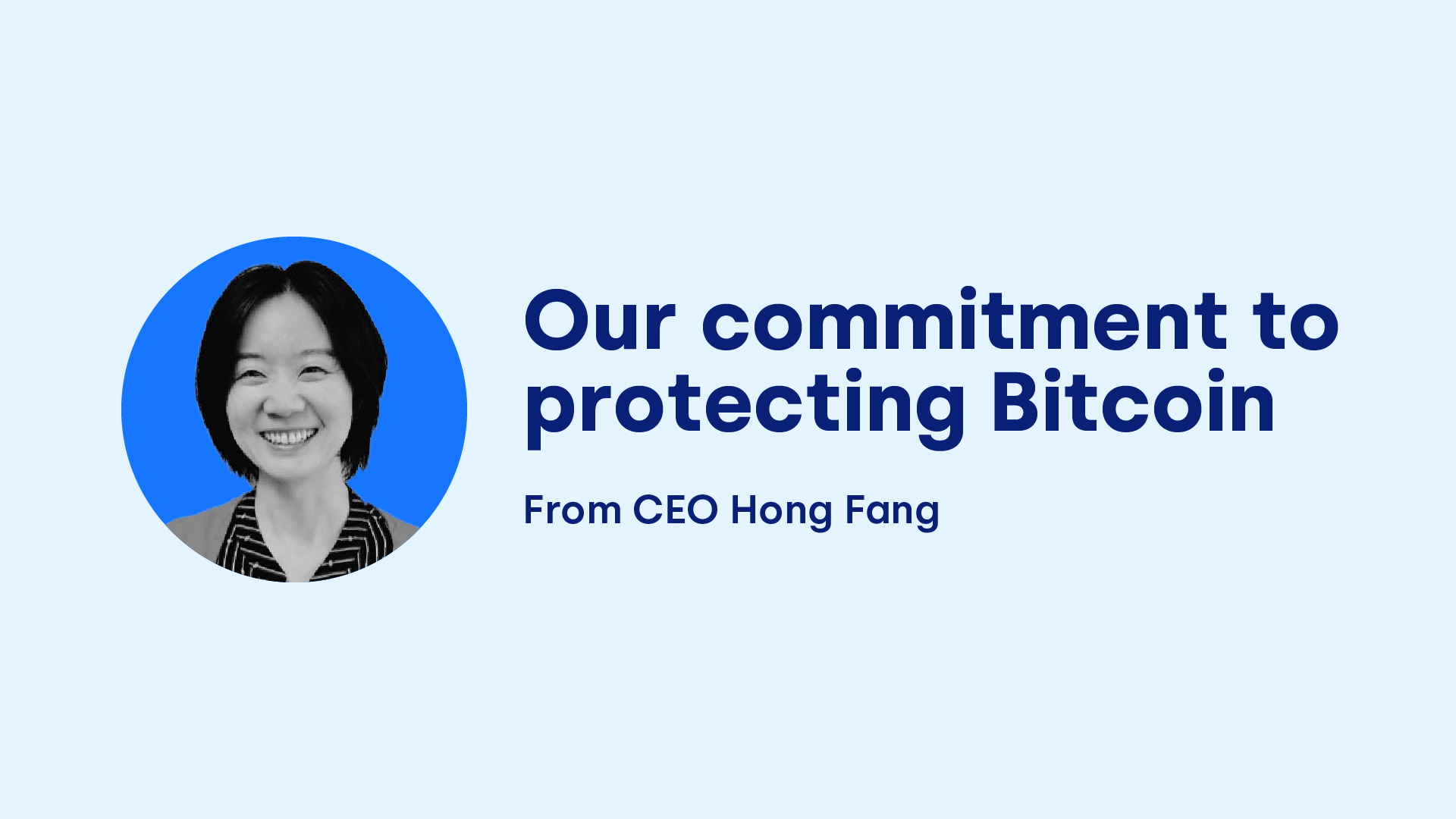 Protecting Bitcoin — why we’re removing BCH and BSV from OKCoin

OKCoin CEO Hong Fang on the history of Bitcoin and why we’ve made the difficult decision to suspend trading of two BTC forks.

Earlier today, we announced that trading of BSV and BCH, among several other crypto assets, will be suspended on OKCoin starting on March 1, 2021.

At OKCoin, we periodically review the digital assets listed on our platform to ensure that their quality continues to meet our standards. In addition to market performance, we take a variety of factors into consideration during such reviews, including ecosystem development and ethos, network stability, quality and commitment of the developer community, liquidity, and ethical or reputational red flags. When an asset fails our periodic review, we may choose to remove it from trading on our platform.

Today’s announcement was the result of our most recent asset review. However, in the spirit of transparency, there is some unique history and context specific to our decision to remove BSV and BCH, which we’d like to share with the community.

Bitcoin and the birth of crypto

More than a year ago, we started to reflect on the role OKCoin should play in the crypto ecosystem. Like many other players in the crypto space, the very creation of OKCoin in 2013 was inspired by Satoshi Nakamoto’s Bitcoin white paper and the ensuing emergence of a crypto industry.

Because of Bitcoin, for the first time in human history, value can be encrypted, stored and freely transmitted without any intermediary in a global peer-to-peer network. Monetary discipline and transparency are coded and solidified by growing community consensus, secured by energy in a decentralized network, and made available to anyone anywhere via open-source software.

Indeed, Bitcoin has introduced a new era of digital hard money. Individual responsibility, freedom and value is honored and celebrated. It ignites many people’s passion for crypto, ours included. Bitcoin is also an asset that serves as the foundational layer of the crypto markets.

As an exchange that has been part of the market infrastructure since the early days of Bitcoin, we feel compelled to refresh and stay true to our conviction in Bitcoin. Here’s a brief history of how we’ve supported and continue to support the Bitcoin ecosystem:

Being a constructive contributor to the Bitcoin ecosystem is our standing commitment to our industry, and we have no intention of stopping here.

Bitcoin and its hard forks

People who have been around long enough (or have studied the history of Bitcoin) know that back in 2017 and 2018, there were heated community debates around what Bitcoin was created for, and how to address the scalability constraints in its protocol. During those debates, Bitcoin Cash (BCH) and Bitcoin SV (BSV) went on a different path towards scaling (i.e., larger block size limits vs. Layer 2 solutions) and hard-forked out of Bitcoin.

Before digging deeper into our decision around BCH and BSV, I want to clarify a few points. As a crypto exchange, we have always believed in the following:

That’s basically what we’ve done with Bitcoin and its hard forks: we choose to be a neutral platform when it comes to trading the native assets of these blockchains. BTC, BSV and BCH have always been available on our platform. Our customers can choose for themselves where to put their money.

It’s been interesting to observe how people have voted with their own money over the last three years. Today, BTC’s market cap has grown to almost $1 trillion, overtaking top public companies like Visa and Facebook in size. BCH and BSV, in contrast, are valued at respectively ~1.5% and ~0.5% of the original Bitcoin.

At this point, it seems that the markets have cast their vote on what Bitcoin was built for.

In spite of BTC’s market dominance, we wouldn’t have changed our neutral practice with BSV and BCH if it were not for what happened on Jan 21, 2021. When the news hit that Craig Wright — the infamous self-proclaimed creator of Bitcoin and BSV supporter — was taking actions to enforce copyright claims on the Bitcoin white paper, we found ourselves facing a very uncomfortable dilemma.

On the one hand, we continue to believe that we should let our customers make their own decision on whether or not they should invest in certain crypto assets. That belief was reinforced when we saw how people reacted to Robinhood’s suspension of GameStop stock (and several other stocks) on its platform with little communication in advance.

On the other hand, we feel very disturbed by the copyright claim and threat of legal actions that Craig Wright is waging against the open-source community. Wright’s recent lawsuits against websites hosting the Bitcoin white paper are part of a long historical chain of problematic legal actions surrounding his entirely unproven claim to be the creator of the original cryptocurrency.

Bitcoin has never been owned or controlled by any individual or entity, nor should it ever be. Bitcoin was created by the pseudonymous Satoshi Nakamoto. Regardless of who Nakamoto is/are, the ethos of open-source, decentralized and community-driven consensus building runs deep in Bitcoin’s DNA. To challenge that ethos is to challenge the very foundation of what Bitcoin stands for.

Even if Wright doesn’t control or own the entire BSV community, he is a very significant and influential stakeholder there. If we continue to allow trading of BSV on our platform, we run the risk of implicitly supporting such an attack on the open-source nature of Bitcoin, which is highly destructive to the Bitcoin ecosystem (and the crypto ecosystem as a whole).

The string of events around the copyright to Bitcoin also highlights the challenge of branding conflicts between Bitcoin and its derivatives. Bitcoin is an open software. To the best of our knowledge, there are roughly 102 crypto assets that emerged as a fork of Bitcoin. Some of these assets forked Bitcoin’s source code, and have unique names and logos (e.g. Litecoin). A few others chose to hard-fork and mis-use Bitcoin’s brand to promote themselves as the “true Bitcoin” (e.g. BSV and BCH). This branding decision is, in hindsight, a questionable path forward.

2020 was the year when we welcomed a new wave of investors into crypto. Most of them are embracing crypto because of their interest in Bitcoin. Such branding ambiguity for Bitcoin can be very misleading to new retail investors. As we at OKCoin continue to build a global gateway to crypto, we have to ask ourselves: how can we play a responsible role in promoting awareness and protecting new entrants from unintentional trades?

After reflecting on all these questions, we knew we had to make a choice. To be honest, it is a hard choice for us, which has led to a lot of earnest internal debate. In either direction, we run the risk of violating certain principles we’ve been following since our inception. But unfortunately, inaction is action. We are not a decentralized platform, where the course of action can be ultimately reflected in all actions taken by everyone over time. The best we can do is to take a stand to protect the original ethos of Bitcoin, and to protect our customers.

Our decision on BSV and BCH

So here we are, with our decision to remove BSV and BCH from trading on our platform in an effort to firmly stand up for the shared spirit of the open-source community, support the Bitcoin ecosystem and protect new investors.

To be clear, we are not against hard forks in general, and we see the value that some of these networks are creating. We are also not against the communities that believe in the utility of these tokens. We are very much aware that some members of the BSV and BCH communities are actively building use cases that they believe will benefit people beyond their own community. We fully respect that. People should be able to agree to disagree.

We are just having a hard time ignoring the malicious misinformation war waged by Craig Wright and other high-profile members of these communities; nor can we gracefully give investors access to BSV or BCH while realizing that some may feel tricked or confused by the branding ambiguity between these assets and Bitcoin.

We view both factors as very destructive to Bitcoin — the cornerstone layer of our industry. Before we have a better way to both separate BSV from Wright’s attack on the open-source community, and to differentiate these two derivative protocols from the original Bitcoin on our platform, we feel more comfortable with removing them.

Should the BSV and BCH communities listen to the broader market and choose to rebrand away from Bitcoin in pursuit of their own path, we would be very happy to revisit our decision and change our stance on these assets.

We are thankful to the many community members who have reached out to us sharing their concerns. As explained above, this was not an easy decision, but we followed our heart and strived to do the right thing. We firmly believe that as we continue to build a more open and inclusive new system, it is important to remember what has brought us together here in the first place. Looking ahead, we will continue to invest in the Bitcoin ecosystem, and stand up in support of the open-source and decentralized ethos of our industry.

Looking forward to more constructive and open discussions in 2021.