Ethereum 2.0 Update, Part 2: ETH2 is on Track for November 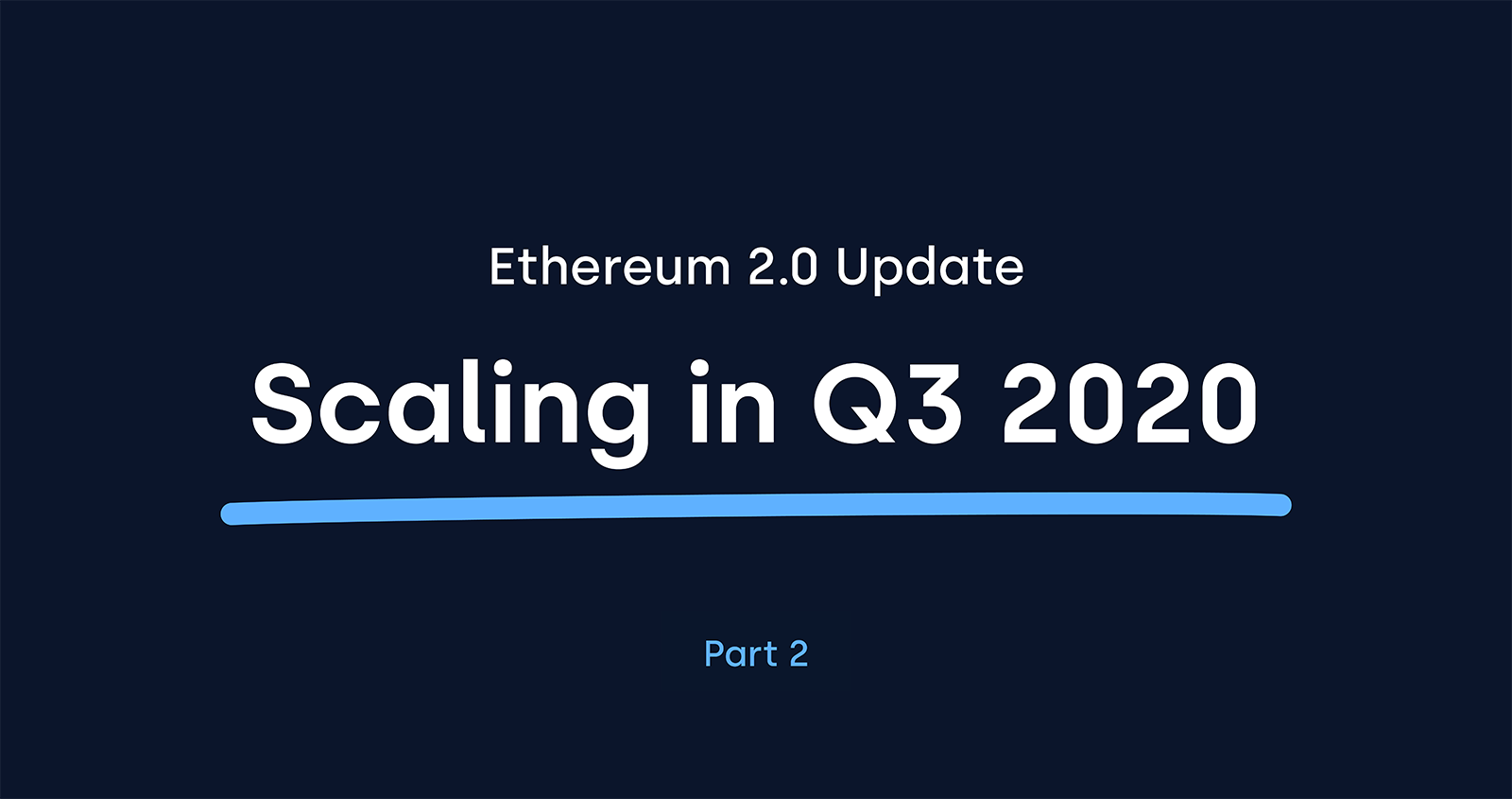 Ethereum 2.0 Update, Part 2: ETH2 is on Track for November

The first phase of the Ethereum 2.0 Serenity upgrade is on track for late 2020 and other smart contract blockchains are processing transactions faster

On September 24th, we published part 1 of our Ethereum 2.0 update, discussing a possible solution to Ethereum’s scaling issues: Optimistic and ZK Rollups, second-layer sidechains secured by the main Ethereum blockchain. In part 2, we look at the timeline for the first phase of the ETH2 Serenity upgrade, and how other blockchains could ease pressure on Ethereum users and developers.

On a longer-term basis, there’s Ethereum 2.0, also known as ETH2. As we outlined in a previous blog, ETH2 is an all-encompassing upgrade that will switch the method through which Ethereum nodes reach consensus from Proof of Work (mining) to Proof of Stake (staking). This, coupled with a technology called sharding, should decrease the emissions of Ethereum nodes while also enabling more, faster, and cheaper transactions.

Raul Jordan of Prysmatic Labs, a developer group working on the Ethereum 2.0 clients for the upgrade’s first phase (“phase zero”), recently announced that the upgrade is still on track for this November:

“We can likely perform a feature freeze by mid-October, allowing us to only work on security improvements and UX before going live. If all goes well, November is still looking good for a launch from our perspective.”

This came shortly after Afri Schoedon, another prominent Etthereum developer, also said that November is a likely launch date for the upgrade:

“The Ethereum 2.0 beacon chain will launch in November unless we find severe bugs in clients or protocol. I’m in-between Vitalk and Justin with my estimation here, I don’t think that we necessarily need to delay Ethereum 2.0 into 2021 unless we find critical issues. We are well on track for a late 2020 launch.”

The issue is that ETH2’s first phase launching doesn’t mean that the scalability issue is immediately solved.

ETH2’s first phase only entails a staking chain where users cannot fully deploy smart contracts. As pointed out by the pseudonymous Ethereum analyst “DCinvestor,” “It will take years before eth2 will fully deliver the L1 scaling we desire.”

It will take a number of years, likely upwards of two, for ETH2 to undergo its full rollout and for all leading protocols and assets to migrate their smart contracts and then their users into the new iteration of the Ethereum network.

Other blockchains could ease pressure on Ethereum users and developers

If Ethereum cannot scale properly in the near term, it is likely to give up market share to other smart contract blockchains that offer superior transaction speeds and potential throughput. This has already begun, with other networks supporting smart contracts reporting its own DeFi protocols and thus seeing an influx of users.

Polkadot, for instance, has rapidly entered the narrative as a potential contender to Ethereum. While the coin DOT launched just recently, Polkadot has been in the works for years, having secured over $100 million in funding during 2017’s bull market. Polkadot is a sharded multichain network where multiple blockchains, dubbed “Parachains” in Polkadot’s case, work in tandem to eliminate the transaction bottlenecks that other single-chain networks face. The project was founded by Gavin Wood, creator of Ethereum’s Solidity programming language and an Ethereum co-founder.

Many developers and users have picked up on Polkadot’s potential, with a number of developers announcing DeFi projects for the network that will be released in the coming weeks and months.

Due to its sharded and multichain nature, the blockchain can process two orders of magnitude more transactions per second than Ethereum can.

Other blockchains that operate with similar goals to Polkadot such as Solana and Algorand have also seen development over recent weeks as Ethereum users and developers upset about the sometimes-poor user experience look for new solutions.

OKCoin has listed Polkadot’s DOT token and is currently considering the addition of other assets that underlie these new-generation blockchains.

Read more about Ethereum and DeFi, and buy ETH and DeFi assets on OKCoin.