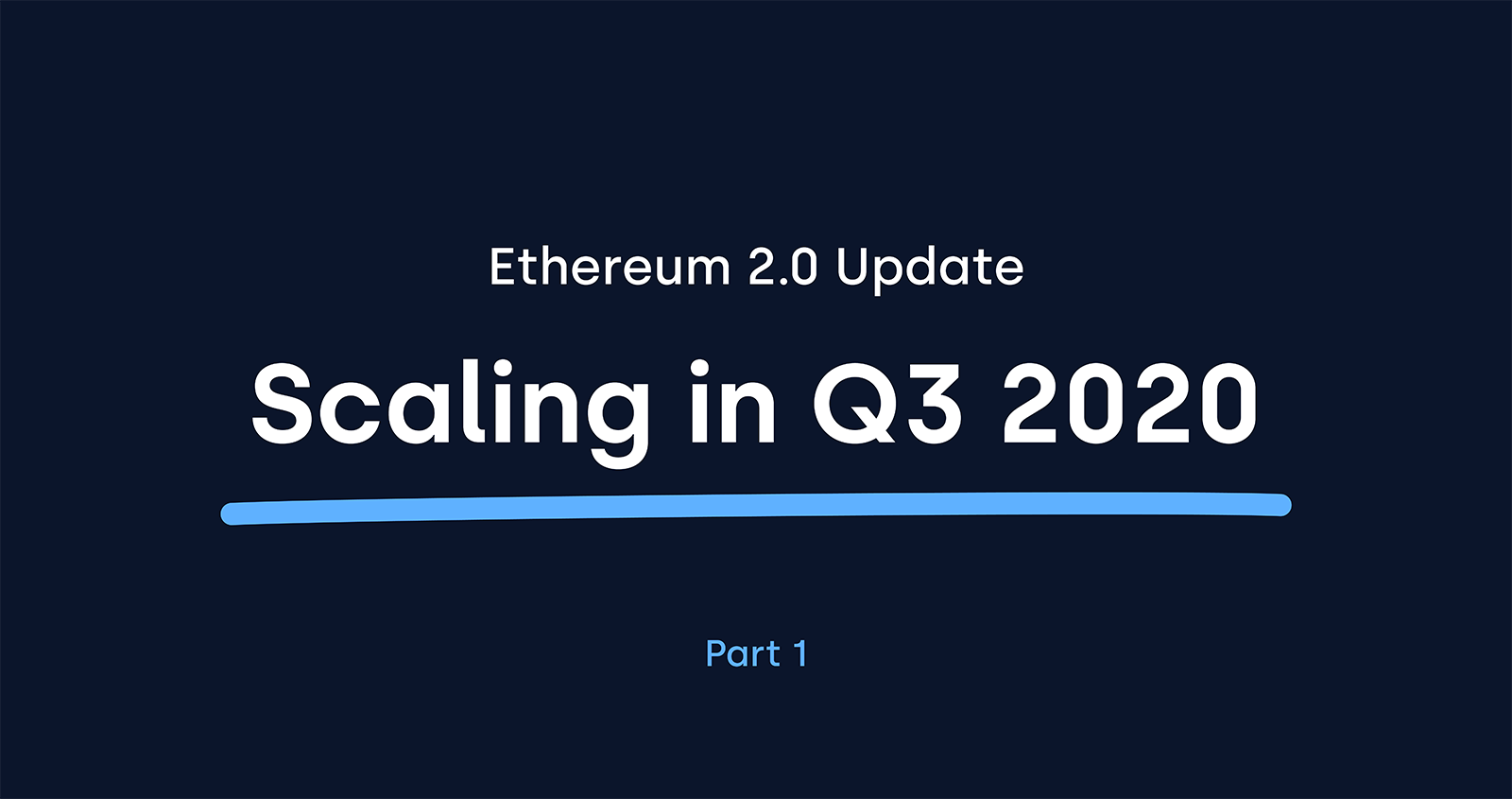 A new, innovative scaling solution may help DeFi congestion on the Ethereum blockchain

The Ethereum Serenity upgrade brings scaling improvements to the popular blockchain, which is again experiencing congestion and skyrocketing transaction fee costs. Today, there appears to be new solutions that can help mitigate these costs as Ethereum-based DeFi protocols and tokens explode in activity. This is part one of a two-part series.

Despite ETH’s price correction, activity on the Ethereum blockchain remains at multi-year highs as the decentralized finance (DeFi) craze has continued.

At one point last week, after Uniswap launched the UNI token, the cost of gas hit 1,000 Gwei. Gas is how the cost of Ethereum transaction fees are calculated — and the “normal” cost of gas is closer to 50–100 Gwei.

This congestion meant that simple DeFi interactions such as trading on Uniswap or depositing capital into Compound cost in excess of $50 — fees that few retail users would want to pay. Ryan Watkins, an analyst at Messari, summed it up well when he wrote:

“Ethereum is damn near unusable right now. I can only imagine what retail will think if they eventually come into this market and face $50+ gas fees and 10+ minutes transaction confirmations. This has been my biggest anxiety about this bull market. The protocols are ready, the infrastructure is not.”

Three Arrows Capital’s Su Zhu echoed this when he wrote on the day of 1,000 Gwei transactions that “Ethereum usability is absolutely atrocious.”

The situation, though, may not be all too dire: development companies within the space have recently announced a series of updates with regards to Ethereum scaling solutions that could ease the stress put on the leading blockchain.

The most talked-about solution in the medium-term to scaling is a technology called rollups, which have been adapted by different companies. The most prominent of these rollup types are Optimistic Rollups and ZK Rollups.

Each type of rollup uses the technology in a different way, but here are the basics: a rollup is a second-layer sidechain secured by the main Ethereum blockchain. Funds are deposited into a smart contract on the mainchain, which is then controlled by the rollup’s operators and users. This allows for extremely high transactional throughput at low cost as funds in the original contract are not actively moved between owners.

Protocols trying to integrate Optimistic Rollups now include Uniswap, whose native token we just listed, and Synthetix. In 2019, Uniswap released a testnet called Unipig, which runs on Optimistic Rollup. The solution purportedly facilitated around 250 transactions per second at no gas cost. Uniswap undergoing scaling is crucial because Uniswap-related transactions make up a large percentage of the gas consumed by Ethereum users each day.

There’s also ZK Rollups, which was recently integrated into the decentralized crowdfunding platform Gitcoin. Others are working on integrating the technology as well. Individuals like Jeremy Allaire, the CEO of Circle (which itself is behind USD Coin), is excited about ZK Rollups:

“With the Ethereum Istanbul hard fork, zero-knowledge Rollups are now possible and will allow Layer 2 scaling on Ethereum supporting upwards of 3000tps (larger than Visa), while maintaining decentralization and privacy. This is a big win for ETH-based stablecoins, [like USD Coin (USDC)].”

Optimistic Rollups are pertinent because Optimism, a team working on the solution, has dropped hints that a testnet is coming. “Sunday funday… No rest-yet for the testnet,” a September 20th tweet from the team reads.

It’s worth noting that not all think rollups are the best option for scaling DeFi, at least in their current iteration.

Cointelegraph spoke with the chief executive of Matter Labs, which as aforementioned is working on an implementation of rollup tech. The CEO, Alex Gluchowski, remarked that the technology may harm composability:

“It’s unclear how successfully Optimistic Rollups will execute on their promise of 100% composability. We haven’t seen that so far as there are many hidden pitfalls there. The technology is not as simple as it may seem.”

Composability is a term that has often been used in DeFi to describe how different protocols interact with each other to build network effect, generate yields, and create viable use cases. For further context, the Optimism team has asserted that there will only be one rollup to “ maintain seamless composability between applications.”

Others have pointed to the one-week withdrawal or exit period built into Optimistic Rollups, where funds in a rollup are not available to be fully withdrawn instantly.

This is part one of a two-part series updating you on the Ethereum 2.0 update. Stay tuned for part two coming soon.

Don’t miss out: OKCoin just launched an aidrops program that gets you up to $100 free BTC when you buy / sell any (or all) of our newly listed DeFi tokens.

Don’t own any crypto? Follow us and RT on Twitter to claim your free bitcoin airdrop #OKCoinAirdrops are our way to reward and support OK...

Many DeFi assets experienced a strong bounce as Ethereum fundamentals look “stronger than ever” Following bitcoin (BTC) and ethereum (ETH...