Is DeFi bringing in new money? 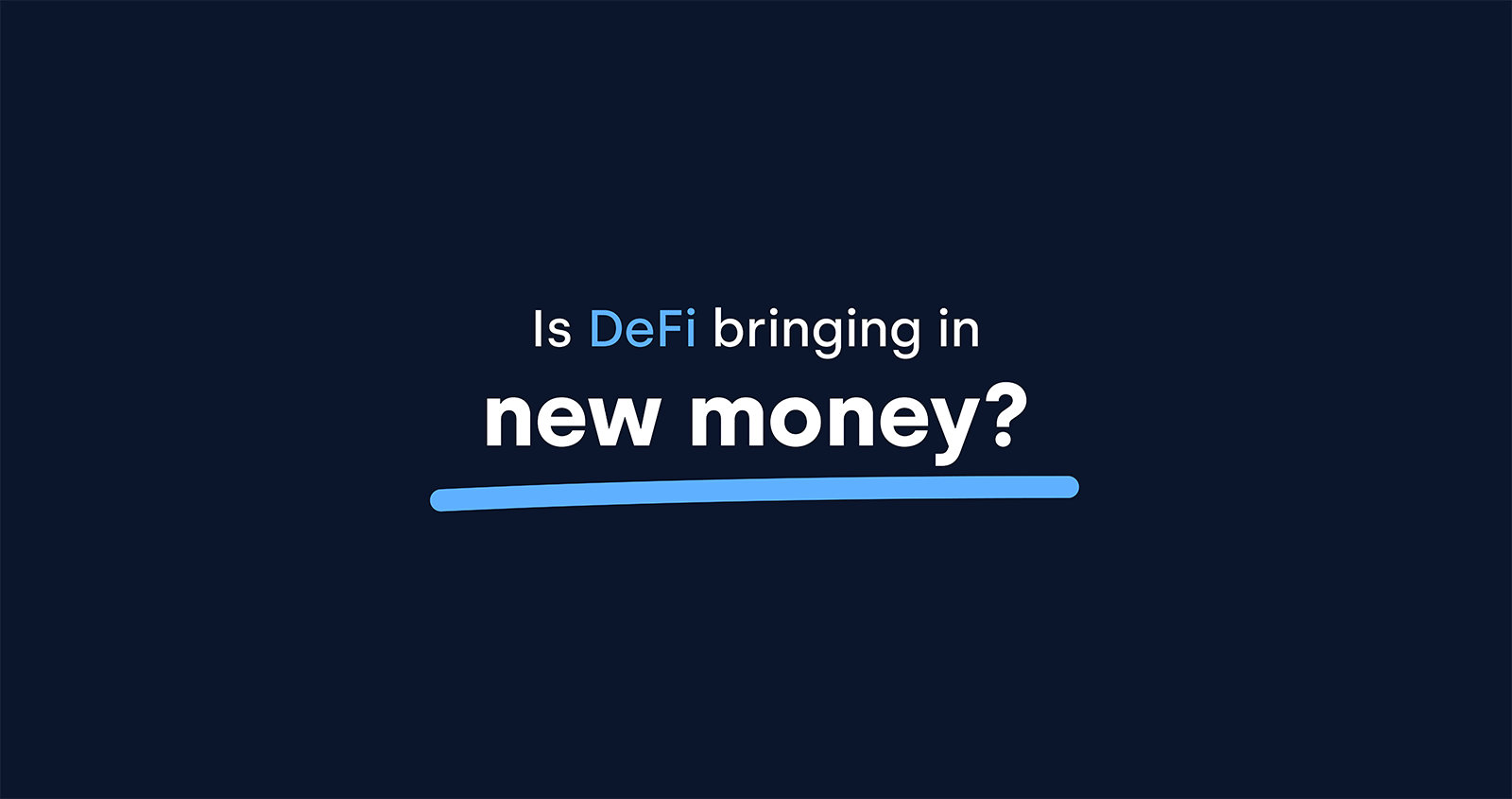 Is DeFi bringing in new money?

Or is the money entering into DeFi coming from existing cryptocurrencies?

By most metrics, decentralized finance has grown exponentially over recent months. The value of coins in the DeFi ecosystem, according to CoinGecko, has reached $15 billion; at the start of the year, this metric was closer to $3 billion. Also, DeFi Pulse indicates that there is now over $7 billion locked in DeFi applications — 1,000% higher than this metric was at since the start of 2020.

The success of DeFi, which has primarily been relegated to Ethereum, has captured the attention of many in the industry and across Wall Street. How this previously-niche yield-focused segment of the cryptocurrency market has accrued billions of dollars worth of value in mere months has amazed analysts and investors.

With such rapid growth in such a short time frame, it’s worth asking, is DeFi bringing in new money, or is wealth in the cryptocurrency market just being redistributed to DeFi and away from altcoins?

Our takeaway: According to data, it’s a mix of both.

Ethereum DeFi is absorbing other cryptocurrencies

The best metric indicating Ethereum’s decentralized finance protocols are receiving capital inflows from other cryptocurrencies is the dramatic uptick in tokenized bitcoin on the Ethereum blockchain.

According to news.Bitcoin.com, as of the beginning of this week, there is now $700 million worth of bitcoin circulating on Ethereum through synthetic tokens like WBTC, RenBTC, hBTC, and others. This means that there is now over 0.25% of all bitcoin in circulation based on Ethereum.

Analysts see this as the beginning of a trend where the billions of dollars locked in blockchains and coins other than Ethereum and its tokens will slowly be siphoned into DeFi and ether, enabled by products like Yearn.finance’s yETH.

MakerDAO founder Rune Christensen wrote that the Bitcoin being sent to be used in DeFi is a sign that Ethereum and its protocols will become an “economic vacuum”:

“4 million Dai was just minted with WBTC in a single transaction. This really showcases the latent demand for non-ETH assets, and it’s the beginning of a broader trend of DeFi acting as an economic vacuum that will eventually attract almost all value to the Ethereum blockchain.”

The reason why many are so confident this “vacuuming” is happening is that many other cryptocurrencies do not generate yield as they do on Ethereum. Furthermore, many cryptocurrencies from the 2017-2018 bull market have lost their luster, with their teams failing to deliver the products they once promised.

Jason Choi of the Spartan Group, a cryptocurrency venture and hedge fund based in Hong Kong, put it best when he said:

“I can’t find a defensible thesis for most $BTC forks (LTC, BCH, BSV) over the long term. With the emergence of fee-accruing tokens in DeFi, it seems natural that capital parked in these glorified digital pet rocks either flow to BTC or to DeFi.”

DeFi is also drawing in hundreds of millions from external investors

Although it would be all well and good for DeFi to represent the majority of the cryptocurrency market’s value, true growth will be unlocked if it manages to capture assets locked in legacy markets.

Fortunately for DeFi bulls, this transition has begun.

The aggregate market capitalization of U.S. stablecoins, which are at the core of Ethereum’s decentralized finance ecosystem, have seen a parabolic explosion in value since the start of the year. Nic Carter, a co-founder of crypto data startup Coin Metrics, recently indicated that an average of $46 million worth of stablecoins has entered the market since the start of 2020:

It’s important to note that stablecoins do have other purposes than being used as yield-generating assets in DeFi. Namely, they’re used by crypto traders looking to hedge their spot positions, by traders as collateral, and by businesses looking to transact in U.S. dollars in an efficient manner.

But on balance, the size of the stablecoin market is used as a metric of how much capital is entering the cryptocurrency space as a whole.  Joseph Todaro, a managing partner at Blocktown Capital, explained this when he wrote:

“The amount of money entering crypto right now is insane. In the last 2 months, we have seen $5 bil of fresh USDT and $800 mil of fresh USDC. And these are just the on-chain metrics. Much more $$$ that isn’t flowing through stablecoins.”

What makes it clear that external capital is entering DeFi directly is an uptick in the interest the “outside world” has in this segment of the cryptocurrency industry.

In July, a user of the Value Investors Club — a self-proclaimed “elite” group of anonymous investors literally made up of “partners at hedge funds,” according to Barron’s — asked about DeFi.

Wall Street’s interest in Ethereum and DeFi was later confirmed when the head of DTC Capital, Spencer Noon, wrote that he has personally gauged much interest in DeFi from his institutional investor contacts:

“My read on #DeFi after speaking with institutional investors, fund managers, OTC desks, and FOs over the last few weeks: The herd is coming. They’re excited about DeFi but new to it, so they’re buying $ETH first.”

DeFi has become so popular in those circles that Mike Novogratz, the founder of Galaxy Digital and a former Goldman Sachs partner, was asked about the subject matter in a recent earnings call by a Wall Street analyst.

With top decentralized finance protocols offering yields in the dozens of percent while banks offer minimal interest rates while bonds have negative yields, it’s clear to see why such a large amount of capital is entering crypto, then DeFi.

Considering the trillions of dollars worth of capital locked up in traditional bank accounts, legacy markets, and other financial vehicles, though, there’s likely still exponential potential for DeFi to grow into.

If DeFi bulls are to be believed, this market segment still has billions of dollars worth of value to accrue in the coming weeks and months.

Top investors and developers in the space, though, expect growth to slow as the frothiness of the current DeFi space tapers out.

A reason why DeFi has garnered so much locked value is that the yields offered on these financial instruments far exceed those offered on other blockchains and in traditional financial mediums. Unfortunately, the truth of the matter is that these yields are generated through cryptocurrencies continuously being printed by protocols, making them inherently unsustainable.

“It’s a short-term thing. Once these enticements disappear, you could easily see the yield rates drop back down to close to 0%. […] That’s not something that could make DeFi break, but it should definitely be a sign that [this isn’t something] we should be pushing it out in front of the entire world [right now].”

This was echoed by Tony Sheng, a former analyst at Multicoin Capital and founder of Cozy Finance, and John “Weeb McGee” Lim, a top developer in the DeFi space. Sheng, for instance, wrote:

“i’m pretty scared by this grocery coin thing. not for defi insiders who know how to diff contracts and manage their own risk, but for their friends and friends of friends who show up to play the ‘game.’ A big loss of funds is inevitable be it a hack or a scam.”

Adding to this, there are some inherent issues in the Ethereum protocol that may limit growth. As we mentioned in a previous blog on other blockchains like Tron pivoting to decentralized finance, Multicoin Capital’s Kyle Samani mentioned that Ethereum’s 13-second block time naturally limits the amount of capital and the types of financial transactions the blockchain can facilitate.

What will catapult DeFi to a more sustainable trend of growth, analysts suggest, are technological developments such as ETH2, along with more complex DeFi products.