MakerDAO’s DAI Stablecoin Is Trading Above Peg—Is This Bad for DeFi? 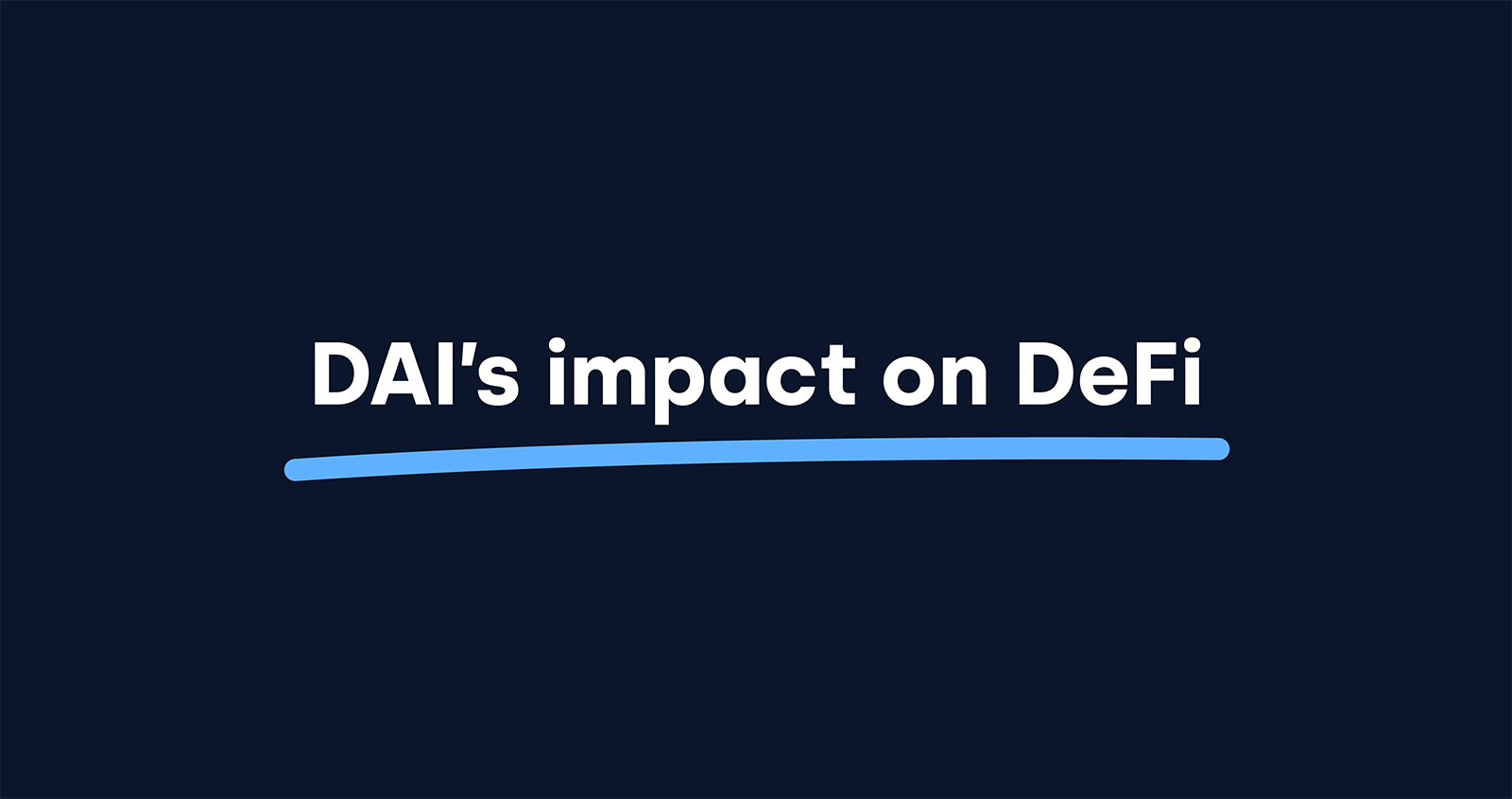 MakerDAO’s DAI Stablecoin Is Trading Above Peg—Is This Bad for DeFi?

As a decentralized stablecoin, MakerDAO’s DAI (a.k.a. Multi-Collateral DAI) has become core to the decentralized finance ecosystem on Ethereum. While it has a market capitalization lower than that of its competitors in USD Coin and Tether’s USDT, DAI is core to a majority of DeFi applications.

Due to a number of factors, though, DAI has begun to trade above $1.00 U.S. dollar in spite of its design. The premium users are paying ranges from 2-3%. Still, some in the Ethereum space think that a persistently unstable DAI could have ramifications on the DeFi ecosystem.

The ongoing instability of DAI may also signal the need for more competitors in the stablecoin space. Although there are other decentralized stablecoin projects, DAI is the only one that has been able to scale.

An intro to MakerDAO and DAI

Before we explain the ongoing situation with DAI’s peg, first the basics about MakerDAO and the stablecoin.

MakerDAO is a decentralized autonomous organization whose primary purpose is to facilitate on-chain loans of DAI by allowing users to put up ether and other cryptocurrencies as collateral. The caveat is that the loans must be overcollateralized, meaning if one wants, say, a $100 loan, they will need to put up $150 or more. This buffer is needed to ensure that if the value of the collateral ever falls too fast, a liquidation process takes place to normalize the system.

The DAI stablecoin, which is meant to trade at parity with the U.S. dollar, is controlled by governance made up of holders of MKR, the native token of MakerDAO. More specifically, the MKR holders can dictate the cryptocurrency’s maximum supply, accepted collateral types, the interest rate holders of loans pay, and a few other variables.

The premise of the project is to provide users with a “decentralized, unbiased, collateral-backed cryptocurrency soft-pegged to the US Dollar” to “succeed where Bitcoin fails.” MakerDAO’s creators believe that Bitcoin’s volatility means it is naturally unable to fulfill the requirements of a traditional medium of exchange.

DAI has succeeded thus far. The project has a core role in some of the largest decentralized finance projects in existence, including Aave, Curve Finance, Yearn.finance, and many more.

So far, DAI’s monetary policy mechanisms have worked well. It, like other stablecoins, have occasionally traded off the dollar peg, but for the most part, it’s been smooth sailing — until recently, anyway.

Demand for DAI is soaring, pushing it above the peg

Since July, DAI has consistently traded above its dollar peg on leading exchanges, OKCoin included. The premium has been small at times, but for the most part, DAI’s price has been around $1.01 to $1.03

This premium has formed as DAI has become a hot commodity amid the ongoing decentralized finance boom, which has increased the market’s demand for all stablecoins and Ethereum-based assets. This is corroborated by the fact that the premium began to form at the end of June and start of July, when DeFi truly began to take off.

The logical move to reduce the premium was to increase DAI’s maximum potential supply. And governance did just that. CoinGecko data indicates that since July 1st, the supply of the stablecoin has increased from 145 million coins to around 420 million coins as of this article’s writing.

Still, the 1-3% premium has persisted.

This persistent demand for DAI seems to be related to the ongoing “yield farming” phenomenon. A trend has formed where investing DAI into certain DeFi protocols and “farms” is dramatically more profitable than investing alternatives like USD Coin, Tether, or otherwise.

Cyrus Younessi, a risk analyst at Maker, explained this potential at the end of June when he wrote, predicting the ongoing situation with quite the accuracy:

“Due to the high APY for COMP farming (circa ~70-100% APY), there is a chance (likelihood, even) that we see an unprecedented demand for Dai. Much of the natural supply for Dai could also be locked up in COMP farming, thinning out sell-side orderbooks.”

A good way to illustrate this is through Yearn.finance’s Vault products, which we explained in a recent blog. Quickly, Yearn.finance is a DeFi protocol that is meant to maximize the yields one earns on their cryptocurrency, and Vaults are the product through which these yields are primarily achieved.

Again, this disparity, which often amounts to hundreds of percent, between yields offered on DAI deposits and other stablecoin deposits can be found across a swath of protocols. Just check LoanScan.

DAI may also be running a premium because it is relatively decentralized compared to USDT and USDC. Both stablecoins, along with their smaller competitors, have all been recently revealed by blockchain analysts to have functions where coins of certain addresses can be frozen. Although useful in stopping criminals, what if the admin addresses make a mistake or want to manipulate those stablecoins in some other way?

Does abandoning the peg pose risks to Ethereum and DeFi?

The premium to the dollar peg may soon get even more exacerbated.

As this article is being written, on September 8th, a series of monetary policy changes have taken place with MakerDAO.

First and foremost, the maximum potential supply of DAI has increased yet again, which should help to ease the premium. The issue that at the same time, the stability fee (or interest rate) users have to pay for putting up certain collateral was increased from 0% to 2% and even up to 6% in some cases. This should decrease the amount of DAI in circulation, putting the peg at even more risk.

Prominent crypto researcher “Hasu” summed up the situation well when he wrote:

“Maker giving up on the peg for now – IMO a smart decision, there’s insane demand for stablecoins due to ongoing yield farming, and those who buy it today are not really fazed by a 2-3% drop back to peg. at least this way, MKR holders get to capture some of the value created.”

Hasu added that MakerDAO’s governance has thrown the kitchen sink at the peg but to no avail:

“Maker has tried everything they can to get Dai to $1, now they are out of options. At the same time, any increase of the stability fee is not even going to impact mint-demand because the fee is so small compared to the reward.”

The instability of DAI raises the question of what’s next? Another question to ask is, does DAI trading consistently above its dollar peg pose a risk to Ethereum, DeFi, or any other segment of the crypto market?

Adam Cochran, a crypto-focused venture capitalist and professor at a Canadian college, explained in an April Twitter thread that DAI’s value breaking seriously from the peg poses “DeFi’s biggest risk,” referencing how the coin is “at the base of most of the decentralized finance ecosystem.”

“You may or may not realize, but, chances are that your favorite DeFi protocols rely somewhat on all the tokens in their system not breaking. Compound, Fulcrum, SET, Aave, Uniswap and any other product that relies on collateralization or liquidity pooling have one thing in common – they NEED to be able to trust that all the tokens in their system are functioning properly.”

His fear is that if DAI implodes, meaning its value fluctuates rapidly, a “devastating blow [will be dealt] to DeFi that will wipe out years of trust and progress the space has built.”

Others have been less harsh in their comments, but have still noted the issue in the ongoing premium to the peg.

“We believe this lack of stability and liquidity is translating into uncertainty around using DAI as a decentralized stablecoin in many DeFi protocols. Anecdotally, we have heard a handful of DeFi teams express frustration over DAI’s lack of liquidity/stability, with some opting to use USDC instead. We see this as damaging to DAI’s network effects in the long run.”

Over time this means that if USDC and other stablecoin solutions are adopted even more, decentralized finance slowly becomes an industry reliant on centralized assets.

With regulators ramping up pressure on stablecoin providers due to the imminent launch of Libra, centralized stablecoins could become DeFi’s breaking point, especially if action is taken to prevent on-chain crime.

It’s been another strong week for the decentralized finance (DeFi) market, even though bitcoin and ethereum faced a 25-30% correction ...