What is yETH and how will it benefit ETH? 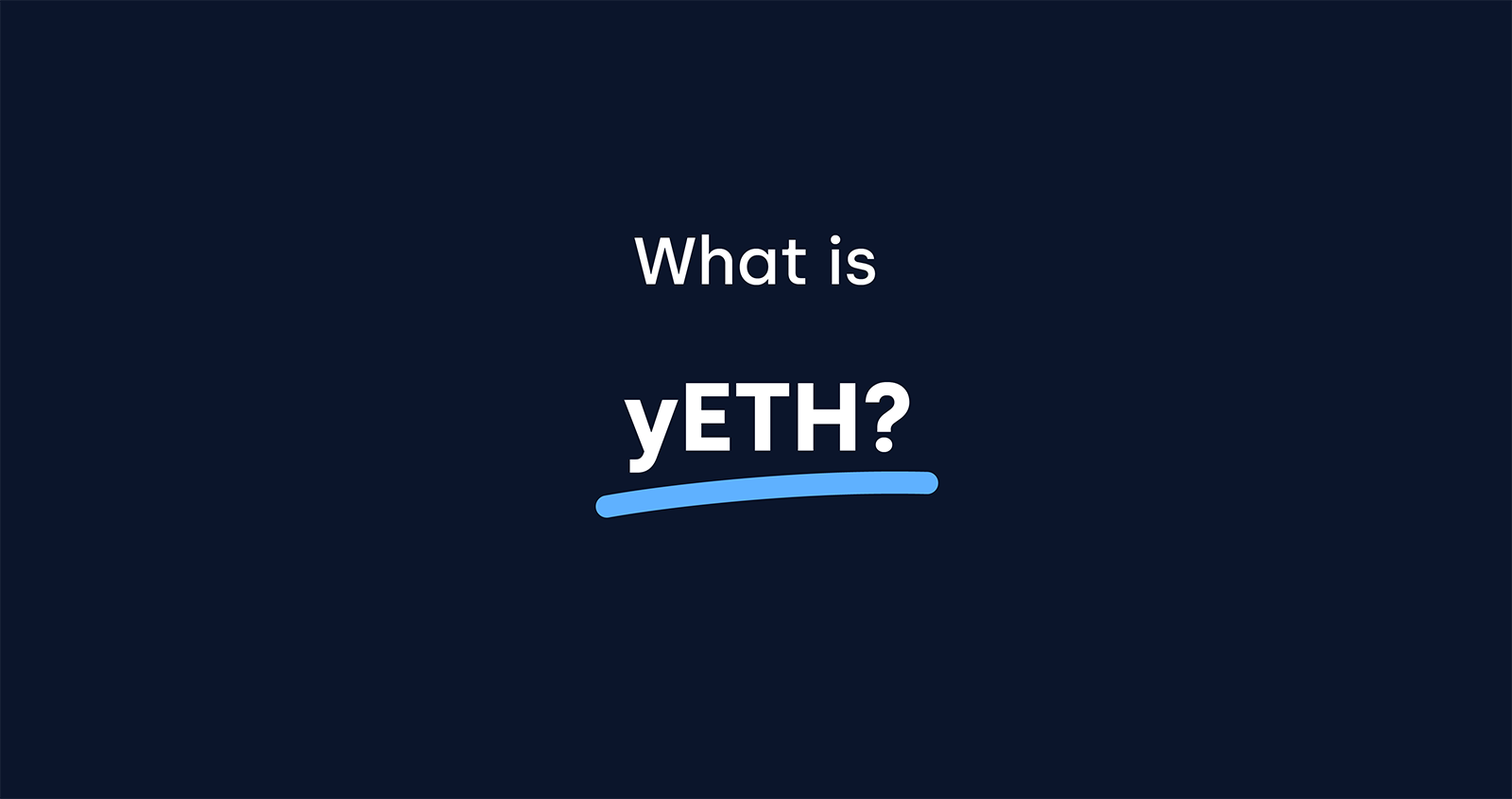 What is yETH and how will it benefit ETH?

Yearn.finance is releasing “yETH”: here’s why Ethereum could continue gaining

At OKCoin, like much of the industry, we’ve been monitoring the rise of DeFi and protocols that are contributing to the virality of retail interest in high yield services. Each week we review select protocols to help our investors and traders learn from our point of view and leverage our findings towards their investment and trading strategies. This week we’re diving into yETH.

Leading decentralized finance (DeFi) protocol Yearn.finance and its native governance, YFI, have taken the cryptocurrency industry by storm over recent weeks. The protocol’s innovative projects, coupled with a parabolic rally in the price of YFI – reaching a $1B market cap in less than two months and gaining 750% in the last 30 days – have captured the attention of the Ethereum community.

This trend is set to continue with the launch of yETH, a new investment product that should provide high returns on investors’ ether (ETH) holdings.

Analysts expect the launch of this product to catalyze another influx of investment in ETH, which is already up approximately 250% since the start of 2020, OKCoin data shows.

Before we explain yETH, a bit more about Yearn.finance.

Yearn.finance is a decentralized finance protocol launched earlier this year by South African Ethereum developer Andre Cronje. In launching the project, Cronje wanted an easily-accessible platform that would provide himself and users with the most profitable investment strategies in DeFi.

The first step in Yearn.finance’s development was a yield aggregator, which allocated capital across DeFi money-market protocols to maximize the earnings one makes from lending capital, especially stablecoins.

Yearn.finance’s scope has since expanded into decentralized insurance, flash loans, and most importantly, Vaults.

Vaults or yVaults are investment products that attempt to maximize the yield one can make by routing capital through different DeFi mechanisms and protocols. The premise is to pool user capital, thus reducing the often-expensive cost of transacting on Ethereum.

The strategies Vaults use to maximize the yield are put into a contract by so-called controllers, who regularly analyze yields and opportunities across DeFi protocols, then codify the strategy to earn the best yield.

Due to returns that range from a handful of percent to 100 percent per annum, Vaults have become Yearn.finance’s most popular product line by far, especially as traditional investments continue to offer little to no yield.

Thus far, Cronje has only created Vaults for Yearn.finance’s native token YFI, Curve.fi, DAI, TrueUSD, USD Coin, Tether, and Chainlink. Each Vault uses a different mechanism to obtain yield in the decentralized finance space. For instance, the Tether Vault deposits USDT into Curve.fi’s liquidity pools, which mints a governance token called CRV. That token is then liquidated for Tether, allowing holders of the stablecoin to make high returns on their holdings.

As you might have noticed, Yearn.finance is missing a key Vault: an Ethereum Vault.

But this is changing. Cronje has deployed yETH, a new Vault for ether holdings, yet no user interface has been generated thus far due to potential concerns about the security and efficiency of yETH.

The current yield farming strategy for yETH is as follows:

Even without a user interface, tech-savvy Ethereum users have deposited 1,940 ether into yETH, according to Rob Paone, the founder of Proof of Talent. The Vault may be redeployed if bugs or potential improvements are identified by Cronje and others in the Yearn.finance community.

It currently isn’t clear what yields can be expected with yETH, but the DAI Vault currently returns 65% per annum. Considering the collateralization ratio of the CDP and transaction fees, the yield offered by this new Yearn.finance product may be closer to 30%.

Importantly, yETH will not be without its shortcomings.

Andre Cronje has caveated all the product releases for Yearn.finance with a reminder that the code he writes often isn’t directly audited by a development team. This caveat, though, has not stopped over $1 billion worth of cryptocurrency from being deposited into Cronje’s Ethereum-based creations.

The risk of hacks and bugs enabled by flaws in the code is somewhat mitigated by the community of users that deposit capital into Yearn.finance. Users with knowledge of Solidity and coding, in general, have regularly released basic audits of Yearn.finance’s products and have yet to find notable vulnerabilities.

There is also a liquidation risk. MakerDAO’s collateralized debt positions can be liquidated if the collateralization ratio drops below a certain threshold. It is currently unclear how Cronje coded yETH to account for that risk.

Analysts believe that the price of ether will benefit from the introduction of yETH as ETH will be seen as an extremely productive investment, as long as it’s deposited in the Vault.

Anthony Sassano, an Ethereum analyst, noted that the vault is likely to be a “black hole” for ETH:

“The yETH vault from @iearnfinance is going to be a black hole for ETH. That is, once ETH goes in, it is going to be very hard for it to come out. Now think about what this does to the price of ETH.”

Economist and financial analyst Alex Krüger put it more simply when he wrote that “The Yearn yETH vault will drive increased demand for both $ETH and $YFI.”

This sentiment comes in response to the current yield environment for ether.

At current, ETH is an unproductive asset; while it does appreciate over time due to natural market cycles, it’s difficult for the average retail Ethereum investor to earn a yield due to the complexity of DeFi. Even easy-to-use yield farming protocols, such as Aave or Nuo, offer a mere 1% per year on ether holdings.

With the introduction of yETH, users are likely to buy ether en-masse just to obtain access to the yields offered by the Yearn.finance product.

“I am keeping a close eye on the ETH/BTC pair, as ETH looks to have bottomed out via BTC and is at a key level not seen since January 2019, said Jason Lau, COO at OKCoin. “This reflects the recent DeFi and activity in ETH in which it is a beneficiary of the DeFi boom (including leading to gas spikes of up to 500 gwei), but also shows that there is potentially still a long way to go for ETH to rise versus BTC. With Bitcoin just crossing that $12,000 support level and ethereum at dollar price levels not seen since June 2018, there is certainly bullish sentiment across the market.”

Crypto, as part of your portfolio, explained

With price swings and evolving protocols, it can be hard to figure out what percentage of your portfolio should be crypto. Here’s our explai...

Learn how buying a little at a time helps you control your average price for bitcoin and other crypto assets. What is dollar-cost-averag...

Why it pays to Earn

Learn more about how you can earn interest on your crypto assets, easily and safely. What is Earn? Earn is an Okcoin feature allowing ...