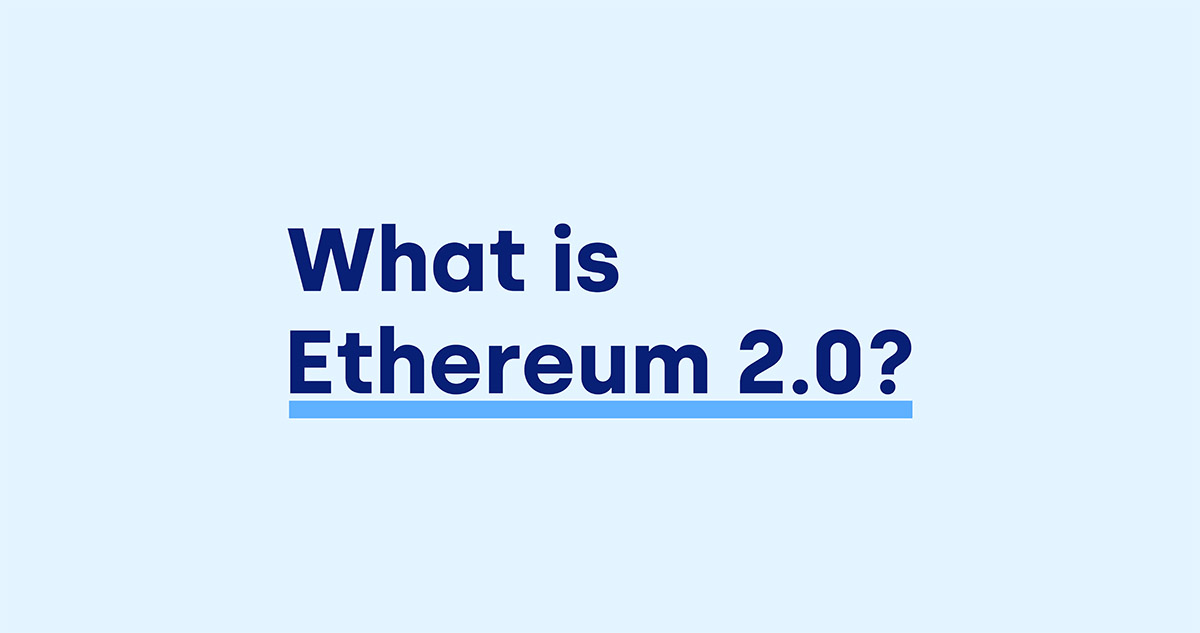 The Ethereum 2.0 update, called Serenity, is a long anticipated change to the smart contracts protocol that will improve scalability and move the network from the proof-of-work consensus algorithm to the proof-of-stake consensus algorithm. Serenity will launch in multiple phases and the first phase could launch as early as July 2020.

What is the Serenity update?

Serenity is a protocol overhaul that improves how the Ethereum blockchain processes transactions in order to support network growth and adoption. The upgrades are focused on further decentralization through the addition of nodes and data sharding, which will allow nodes to confirm transactions more efficiently. The update includes moving to a new consensus algorithm for block validation called proof-of-stake (PoS) in order to make the network more energy efficient.

To date, the Ethereum network has experienced significant slow downs and volatile fees that make it difficult and unreliable to send or receive a transaction. Because the present state of the network requires all nodes to verify and execute transactions, one application has the ability to congest the entire network. These upgrades don’t just support the Ethereum network, they impact and benefit the entire cryptocurrency industry.

But first, Ethereum 101 for context:

What is the Ethereum blockchain?

The Ethereum blockchain is a smart contract platform built as an open source decentralized ledger. Unlike the internet we know today, which is supported by centralized servers, Ethereum is supported by a network of thousands of nodes around the world, forming a ‘world computer.’ The Ethereum blockchain allows applications to be built on top of it by anyone, and supports the creation of smart contracts for decentralized services, all without storing and tracking users’ personal information.

The main difference between Ethereum and Bitcoin is that Ethereum supports the creation and execution of robust smart contracts, allowing for the development of decentralized applications. According to Ethereum.org, the Ethereum blockchain was designed to be “the foundation for a new era of the internet.” In contrast, Bitcoin was built as an alternative currency, providing a decentralized, accessible, global, and borderless payment system.

What is a smart contract?

Ethereum features a programmatic language called Solidity that supports the use of smart contracts. These contracts are code based and self-executing, meaning they allow for the terms of a contract to be upheld without the involvement of a third party. Specifically, smart contracts help you exchange “anything of value in a transparent, conflict-free way.”

Smart contracts enable the development of decentralized applications (dApps) on the Ethereum network. These dApps have included games, marketplaces, collectible assets in the form of non-fungible tokens (NFTs) like artwork and CryptoKitties, a range of financial assets, and the rise of decentralized finance (DeFi) services.

Smart contracts also allow for the creation of programmable tokens, which are based on ERC-20 (the common standard for token creation, Ethereum Request for Comment, and ‘20’ identifies the type of request).

Ethereum is designed as a network of constraints in order to allow development, but these constraints create limitations for functionality. The creation and popularity of NFTs and tokens have clogged the network, leading to slow and unreliable transaction confirmation times and high network fees.

What is the Ethereum 2.0 update?

The next update to the blockchain is referred to as Ethereum 2.0 because it addresses scalability issues by improving the network’s ability to confirm, verify, and execute transactions and introduces a new method for block validation. Previously, blocks were added by Proof-of-Work (PoW), a costly consensus algorithm that relies on heavy energy consumption. After the update, blocks will be added by the Proof-of-Stake (PoS) consensus algorithm.

Scalability relates to the network’s capacity for executing transactions. Presently, every transaction has to be verified and executed by every Ethereum node. This is a problem because it makes the network slow and costly to use. One component of the update is called ‘sharding,’ which means to separate large databases into smaller and more manageable pieces of data. For Ethereum, sharding will partition the database so that more nodes can be added and process transactions faster.

Since the launch of the Ethereum blockchain in 2015, the network has functioned on a proof-of-work consensus algorithm, the same one as the Bitcoin blockchain. A consensus algorithm is a critical component of a decentralized network because it confirms transactions within the network. Nodes, or computers hosting the decentralized ledger that make up the blockchain, are incentivized to confirm and validate transactions with a block reward. This means that when a block of transactions is successfully added to the chain, the node that validated the block receives Ether (ETH), Ethereum’s native cryptocurrency, as their reward (today that block reward is 2 ETH).

Proof-of-Work means you have to perform work to earn the validation of a block. That work is called ‘mining.’ Mining involves running the PoW algorithm on a computer, which uses a significant amount of energy and can be costly, establishing a high barrier to entry for participation. By running this hash algorithm, ‘miners’ hope to solve a mathematical problem which will allow them to find the right answer and add a block to the Ethereum blockchain. This distributed method of confirming transactions helps to maintain the decentralization of the blockchain. Currently, blocks are added to the chain every 13 seconds, which is referred to as the ‘block time.’

Proof-of-stake is a consensus algorithm that requires participants, or nodes, have a minimum of 32 ETH to use as collateral in order to participate in the network. ‘Staking’ ETH means to have your funds locked up while you act as a block validator and gives you the right to earn a block reward. Having to stake ETH acts as a security measure ensuring that participants act in the best interest of the network; if they act against the network, their ETH can be forfeited.

While anyone can stake tokens, participants are typically able to validate blocks based on the proportionate value of the stake. For example, staking 2% of the network value means getting to validate 2% of blocks, and receiving 2% of the block rewards. The more ETH people stake on Ethereum 2.0, the greater its level of security, and the stronger the network.

Ethereum 2.0 includes multiple phases. The first phase, to be implemented as early as July 2020 and will function as a transition to proof-of-stake. To date, the Ethereum blockchain has undergone seven protocol upgrades.

Look out for more posts explaining the impact of the Ethereum 2.0 update. As of today, the ETH price is about USD $230, you can trade ETH by signing up or logging into okcoin.com — our fees are among the lowest.

EIP-1559, Ethereum’s latest upgrade, is about to activate. Here is what it means and what it will change for ETH investors, in simple terms....

Crypto, as part of your portfolio, explained

With price swings and evolving protocols, it can be hard to figure out what percentage of your portfolio should be crypto. Here’s our explai...