Bitcoin is the Antidote to Unlimited Money 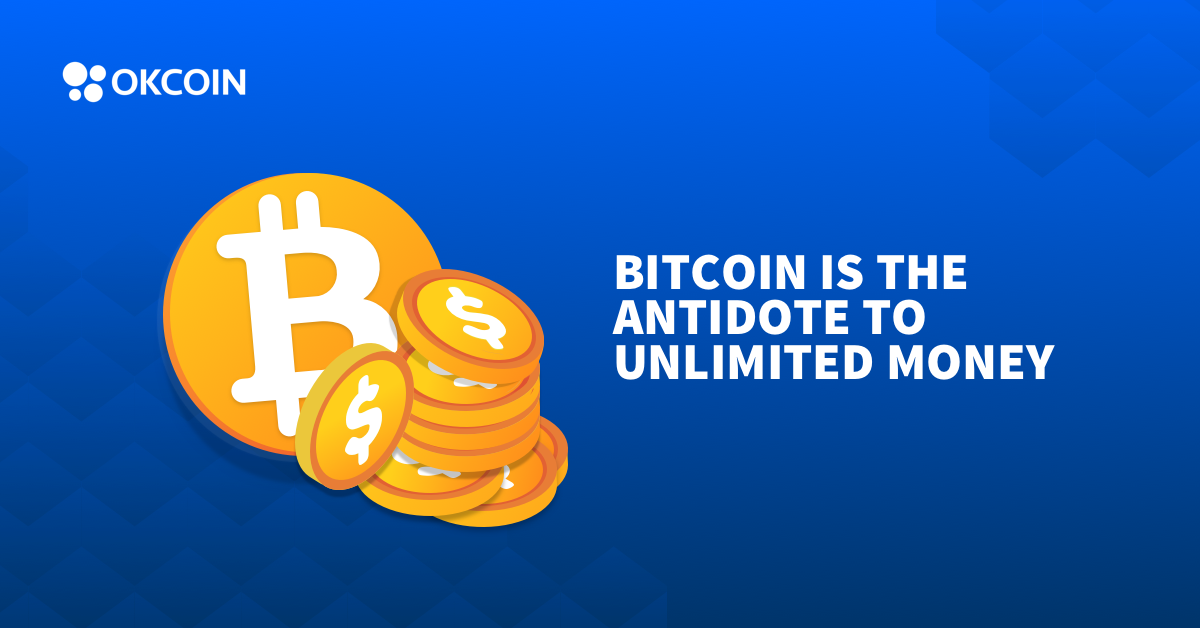 Bitcoin is the Antidote to Unlimited Money

Imagine if the money supply was finite, and the Federal Reserve could not print any more dollars. Imagine what that would mean for the purchasing power of your money and its ability to store value.

The monetary and financial system is adjusted, through accommodating policies, to serve the times. In contrast, Bitcoin does not have this flexibility; the code cannot be changed. This is the primary basis for its value and for its utility as a store of value.

LIVE COUNTDOWN TO THE BITCOIN HALVING

By contrast, Bitcoin has given us the opportunity to test the theory of a limited supply asset in the context of a real-world currency. With a finite supply of 21,000,000 bitcoins, inflation can be considered as priced in. The rate of supply is lessened by half after predetermined intervals of 230,000 blocks on the Bitcoin blockchain (approximately every four years). This ‘halving’ is a core component of Bitcoin’s monetary policy.

The impacts of coronavirus have been financially disastrous. The pandemic has forced the economy to come to a standstill as consumer spending has dramatically decreased. Economists and financial analysts have been calling for a recession for the past several years based on rising corporate and consumer debt and low capital reserves. The coronavirus has exploited these faults and exacerbated the impacts of recession by wildly increasing the decline in economic activity. As a result, the government has been required to create stimulus packages in order to provide financial stability to businesses and individuals. This stimulus comes in the form of increasing the money supply.

Since March, when the Federal Reserve began to address concerns about the economic downturn with ‘stimulus’ plans, we’ve heard financial experts talk about quantitative easing. But what does it mean? Quantitative easing (QE) is a form of monetary policy that introduces new money into the money supply by the central bank, the Federal Reserve. QE could also be described as a euphemism that makes “we’re printing a lot more money” sound complex, necessary, and even pleasant.

QE follows a process of using newly created money to purchase assets, typically bonds, from commercial banks and other financial institutions in order to inject capital into the market. Today, money creation is all done digitally — the ‘‘money printer’ is a metaphor for unstable supply. Though there is critique surrounding the seemingly casual nature of money printing by the central bank, QE broadly provides the financial system with liquidity to help banks, businesses, and people meet their financial obligations during an economic downturn.

Value of the dollar

As money creation continues, the value of each dollar is diluted by increased supply. Since the dollar was introduced, inflation, the measure of the rate of rising prices, has increased, thereby reducing the purchasing power of each dollar. $1 in 1862 (when today’s legal tender or ‘greenbacks’ were introduced) is worth $25.56 in 2020. The chart below demonstrates the inflation of a dollar by the decrease in buying power.

Will we have too much money?

The short answer is likely. QE can help solve the economy’s liquidity problem, but in doing so it creates another problem: inflation. While creating such a large amount of money presents real concerns about the impact of currency debasement, the current need for more dollars is priority. To put it loosely, it’s a case of needing to stop the leak by any means necessary because the leak could be worse than the solution for stopping it.

As inflation reduces the dollar’s purchasing power, the cost of goods increases. Paying for essentials like food, housing, and health services becomes more expensive, taking up a greater piece of your income. Unless incomes rise in accordance with inflation, which they traditionally don’t, inflation can become dangerous.

Bitcoin has been rising in popularity since its inception, but it really shines as an asset during times of financial uncertainty. Unlike other assets that have traditionally acted as stores of value like gold and real estate, Bitcoin doesn’t suffer from default risk, counterparty risk, illiquid markets, or confined geographic mobility. More and more, we’re seeing institutional and retail investors acquire bitcoin as a hedge against inflation.

Over the past several years we’ve seen the impacts of rapidly rising inflation. Venezuela, Zimbabwe, and Argentina have all endured economic crises that have gutted their currencies. There have been extreme cash shortages as people rushed to pull money from banks, and the costs of goods skyrocketed as money lost its value.

Hyperinflation is caused by rapid and extreme increases in inflation. This happens when there are multiple breakdowns in the economy: the government and corporations run out of money so they rely on debt, unemployment grows and tax revenues decrease, borrowing stops, the government prints money to fill the gaps, and money loses its value. At this point hyperinflation is highly unlikely in the United States, but it’s worth being wary of the consequences.

The architectural strength of Bitcoin

In a recent blog post discussing predictions for the Bitcoin halving, we focus on the strength of Bitcoin’s economic design. The halving supports Bitcoin’s utility as a disinflationary asset, managing supply at a stable and staggered rate. The upcoming halving, taking place in just a few days, underscores the significance of a limited supply curve. Scarcity is a significant part of what drives value, and in terms of Bitcoin’s lifetime, that has never been more true than today.

Bitcoin is proving to be resilient in design as the dollar faces headwinds.

Further, Bitcoin’s foundational technology has influenced thinking on Capitol Hill. Coindesk reported that 11 members of Congress addressed a letter to Treasury Secretary Steven Mnuchin outlining how blockchain and distributed ledger technology could “help streamline how cash and supplies are distributed under a federal law trying to boost the economy during the COVID-19 crisis.”

“Among the most important and relevant [of technological innovations] are new mechanisms capable of moving money and providing liquidity quickly, securely, and transparently, including through reliance on blockchain and distributed ledger technologies (DLT),” the letter reads. While it’s unclear what may come of the letter to Mnuchin, it demonstrates that the potential of Bitcoin is being noticed at a greater scale.

Create your OKCoin account to buy and sell Bitcoin, and sign up below for our newsletter to get the latest exchange and cryptocurrency updates.

Cosmos (Atom) and Tezos are now on Okcoin

You can now trade and stake Cosmos (ATOM) and Tezos (XTZ) on Okcoin — and get some of the lowest fees around. 👀 Trade ATOM on Okcoin T...