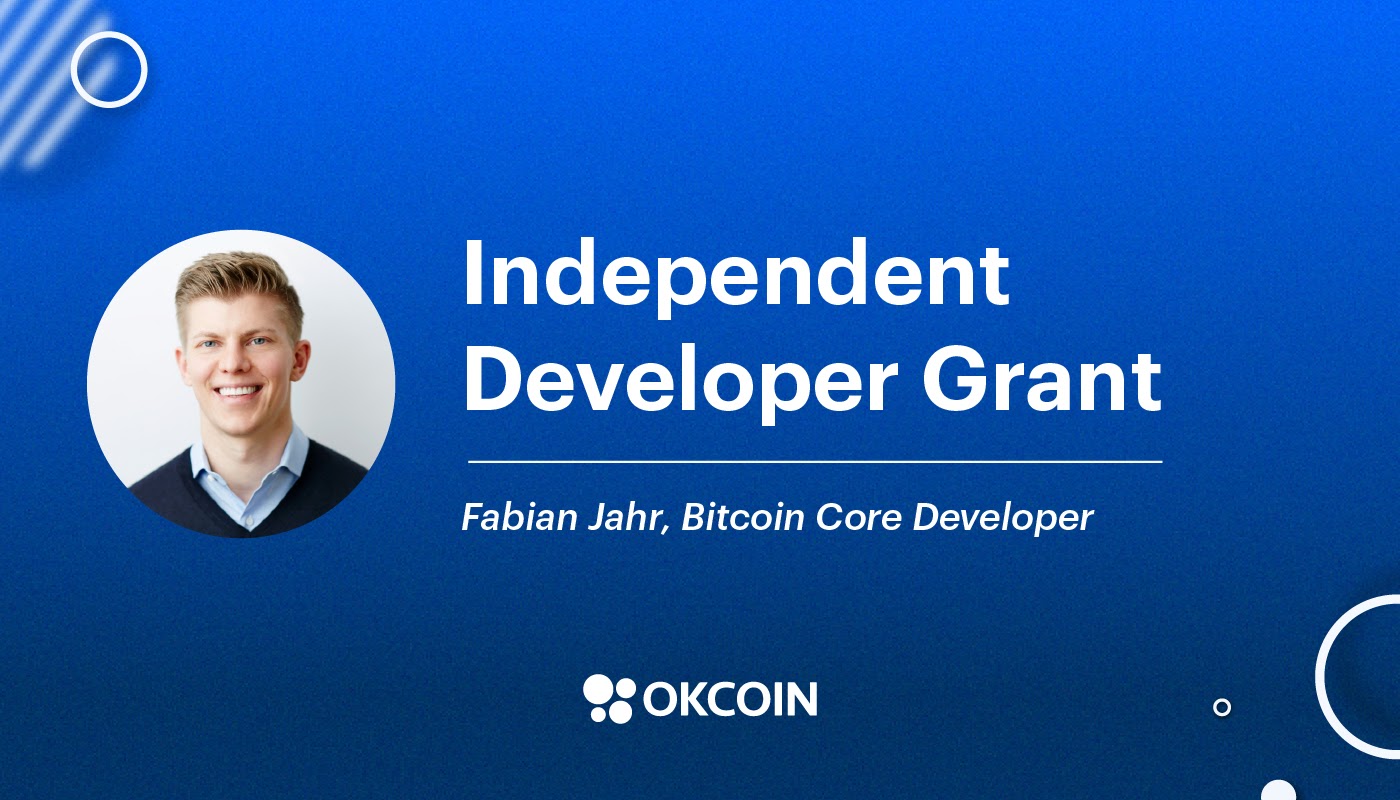 Our mission at OKCoin is to make digital assets accessible to the world. To achieve this, the assets and the underlying infrastructure must be technologically sound. We are already supporting the growth of crypto by providing easy fiat on-ramps into the ecosystem through our exchange. Now we seek to broaden the scope of our contribution by supporting the independent developer community — the very reason why our crypto industry exists in the first place. With the launch of our independent Developer Grant, we hope to make an ongoing, direct contribution to the developers behind leading crypto projects. Bitcoin Core developer Fabian Jahr will be our first recipient.

Here to tell the story of how this program began is Hong Fang, COO of OK Group and OKCoin Chairman. In the interview below, she explains the goals of the initiative and the nature of our work with Fabian.

Why did you decide to focus on individual developer grants?

We at OKCoin have always believed that independent developers are the real founders of the crypto industry.

As demonstrated by its first use case Bitcoin, crypto has a transformative power to drive a paradigm shift in both our financial and social fabric. As we focus our efforts at OKCoin on making it easy and safe to buy and sell crypto assets everywhere in the world, we also constantly remind ourselves that without the continuous efforts of many independent developers working behind the scenes, we will all be just building castles in the sand and playing meaningless financial games, which is not we were signed up for in the first place.

In September 2019, we launched our “Let’s Build Bitcoin Together!” campaign of 2019, a 1,000 BTC pledge to open-source developers. It was our first major attempt in engaging with the developer community. As imperfect as it was as a first step, we walked away with a number of learnings, two of which are: 1) find a more direct way to support the developer community; 2) focus our resources on projects that we perceive as among the most impactful (or potentially so) for the long-term evolution of crypto industry. Providing ongoing support to independent developers on the frontlines is a great way to achieve those goals.

Who is Fabian Jahr?

Fabian Jahr is a Berlin-based Bitcoin Core developer. He first began his BTC career in 2016, at a moment when bitcoin’s potential status as the foundation of an alternative financial system became clearer. Today, he recognizes that roadblocks — including unclear regulation and slow adoption — limit bitcoin’s impact and mainstream applicability. However, he remains optimistic about the future of crypto, and its potential as an equalizer.

As the first recipient of the grant, Fabian will focus on the Bitcoin Core codebase and development process. More specifically, improving documentation for new core contributors, participating in concept review of major future changes to the bitcoin protocol. We hope our grant will help him continue his innovative work — like his Lighting Vending Machine. Stay tuned for our OK Let’s Chat podcast featuring Fabian to hear about his contributions to Bitcoin Core and his thoughts on mainstream adoption.

How were you introduced to Fabian and what about his background and work appealed to you?

We were introduced to Fabian through the Chaincode Residency program, which works with up-and-coming developers to put theory into practice. He embodies the collaborative nature of crypto development by focusing on reviewing the work of other developers, examining developer conference findings, or contributing his own code on a daily basis. His work tends to center on improvements that could streamline bitcoin payments and aid adoption. Lately, he is especially excited by the potential of Taproot and Schnorr — the proposal could improve blockchain efficiency and scalability while enhancing on-chain privacy. He also follows initiatives like BTCPay Server closely. We also appreciate that he is based in Europe, helping us expand our understanding of the role bitcoin plays in a global financial system.

Fabian also engages in developer conferences across the world. This month, he spoke on a panel at the 2020 Advancing Bitcoin Developer Conference. To learn more about the event click here!

What are your hopes for the developer grant initiative?

We see this as one of our long-term contributions to the crypto ecosystem. Our hope is that our developer grants will help sustain the pace of development. In addition, we hope that we can bring some recognition of the importance of independent developers. While the impact of development work rarely makes headlines, it determines the long-term success of crypto projects.

Lastly, we wish to encourage and demonstrate a viable career path as a Bitcoin Developer, in hopes that more people will enter the development space.

Any final comments on your hopes for the crypto industry?

We are fortunate to be part of a transformative industry. Since OKCoin was established in 2013, our mission has always been to make it easy to buy and sell crypto assets no matter where you are in the world. We believe that financial freedom is the foundation for all the other rights and freedom that we pursue as individuals, regardless of race, nationality, age, and economic status. The creation of bitcoin in 2009 made it possible for us to get a glimpse of what that future might look like.

Our hope is that as we continue to build our OKCoin platform, our developer grants can also contribute to the ongoing (albeit largely unseen) developer efforts to build a robust technological foundation where math and coding is law, individuals are incentivized and empowered to make their own decisions, and the community thrive as a result of that.

Looking Back: One Year of Funding Bitcoin Development

A retrospective of our initiative to support independent Bitcoin Core developers; our learnings and the future of Bitcoin funding It’s be...