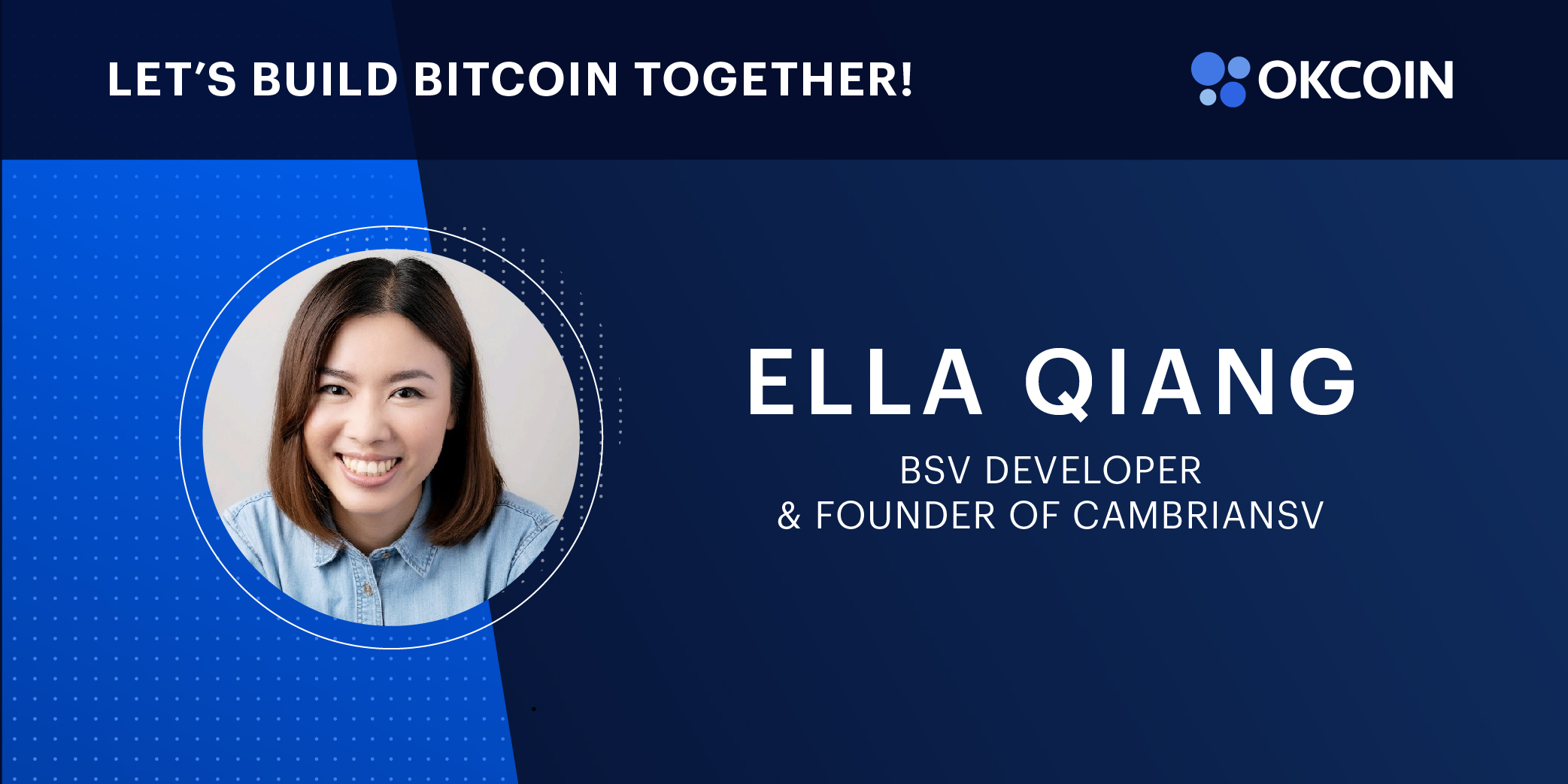 We are well into our Let’s Build Bitcoin Together! pledge: an up to 1,000 BTC donation back into the Bitcoin developer community. Between now and September 27, 2019, crypto enthusiasts can vote for the project they’d like to receive a donation; Bitcoin, Bitcoin Cash, or Bitcoin Satoshi’s Vision. For each vote received, OKCoin will send 0.02 BTC to the respective project. Today we decided to sit down with Ella Qiang, one of the Bitcoin Satoshi’s Vision developers supported by our pledge, to discuss her vision for BSV and the larger crypto ecosystem.

Can you tell us a bit about your background, and how you first got involved in the crypto space?

I come from a traditional finance background. I’ve worked in both China and the US in banking, project finance, and corporate finance before getting into the blockchain space.

I first learned about cryptocurrency in 2014. I was working on my master’s thesis, which focused on the benefits of blockchain for securities trading. I was fascinated by the concept of an online native value transferring system, which connects the world in a way that existing siloed financial systems cannot. Later on, I joined the Stellar Development Foundation, leading partnerships in APAC to explore DLT adoption in payments and international remittances. At Stellar, I started to understand the importance of the economic incentive mechanism of a blockchain system. That’s when I decided to go back to its origin—I started to learn more about Bitcoin. I was amazed by its genius design and I went down the rabbit hole.

Now I’m working on a few projects in the Bitcoin SV ecosystem: RelayX, a superwallet that enables payments to flow between currencies and closed platforms; FloatSV, a digital asset exchange that only supports tokenized real assets; and CambrianSV, a proof-of-work bootcamp to accelerate building applications on top of BitcoinSV.

Why are you excited about Bitcoin SV? How does it fulfill the “Satoshi Vision”?

In my opinion, the Bitcoin whitepaper and early posts of Satoshi have laid out the original vision of Bitcoin. It is a peer-to-peer electronic cash system—a chain of digital signatures, secured and maintained by proof-of-work. It is built to be a scalable system that can support higher throughput than the current capacity of Visa. It also introduces a privacy model, by generating a new key for each transaction.

Bitcoin is self-sustainable because it’s an economic system. Mining subsidy exists in the early phases to bootstrap the network, and transaction fees will need to eventually replace mining subsidy as a revenue source to the miners. To facilitate large on-chain transaction volume that supports Bitcoin’s economics, you need big blocks. This is why the Bitcoin SV scaling roadmap made perfect sense to me in the first place. With the next Bitcoin halving around the corner, the clock is ticking. We urgently need entrepreneurs and enterprises to build useful things that generate millions of on-chain transactions. BSV’s secure and stable protocol is the ideal premise to hook their interest. Bitcoin SV is by far the only project that preserves the economic design of the original Bitcoin, with an aggressive plan to open Bitcoin for business.

The developments of recent months have proved that Bitcoin SV is on the right track. New projects are popping up and enterprises have started to look into deploying solutions on the Bitcoin SV blockchain. Even more exciting, is the introduction of the Metanet, which sets forth the data structure standards on top of Bitcoin SV. Bitcoin SV as data storage and value transfer system together with Metanet as the data structure protocol opens up a whole new paradigm of how peer-to-peer transactions work.

There has never been a more exciting time to work in Bitcoin. We are witnessing and participating in exponential growth that has never been seen in the past.

Tells us about the CambrianSV Bootcamp. How will it help scale BSV?

In the past few months, we’ve seen a “Cambrian explosion” of innovation and creativity coming out of the BitcoinSV community. Tools and infrastructures are being built at light speed, and developers are releasing various new applications enabled by Bitcoin SV. While most application products are still in the early phase, they show what’s possible.

CambrianSV focuses on the application layer of the Bitcoin SV stack, as we believe real growth comes from people building better products using Bitcoin SV as the backend. The program is set up to accelerate the product building process from proof of concept to product release. It is a 7-day bootcamp solely focusing on building the next generation products for the real-time economy powered by Bitcoin SV. Developers will get a direct look into the tools available on the Bitcoin SV blockchain and collaborate with the brightest minds to create the best applications. All participating teams should leave with a finished product that is generating on-chain transactions.

We believe CambrianSV will be a strong catalyst to boost on-chain transactions, where our alumni will be among the top players providing cool products for the real-time economy.

How will CambrianSV use the donation money it receives?

The donation will be used to sponsor top developers for their travel and accommodation expenses during the CambrianSV Bootcamp, on a merit basis, so that all they need to focus on is building.

A lot of attention is focused on cryptocurrency as a “store of value” or a “medium of exchange.” But proponents of BSV tend to focus on its potential as a “unit of account.” Why is this an important distinction?

Bitcoin is all three, with the delivery of a monetary unit as the primary purpose. I think some people overlook “unit of account” because they don’t yet understand the full potential of Bitcoin and how they should act in the Bitcoin ecosystem.

Bitcoin is more than a financial system. It’s a means of registering and tracking of everything that exists in the world, and a new way to create peer-to-peer interactions that the current internet infrastructure cannot support. Fundamental innovation occurs when businesses and individuals write data to the timestamped immutable ledger, and that access is measured by the system’s native asset, Bitcoin. To prioritize Bitcoin as a “unit of account” means to build useful things on top of Bitcoin that use Bitcoin as money. The true utility of the ledger is what gives Bitcoin intrinsic value.

As a Bitcoin-based business, your best strategy is to align your economic interest with the network growth, which means to think of maximizing profit in the Bitcoin unit instead of fiat.

You’ve been quoted as saying, “bitcoin teaches us to be a better self.” Can you explain what you meant by this?

There are several aspects to this statement:
1) guides us to live life in a “proof-of-work” way.
2) Its immutability, transparency encourages us to stay honest and responsible.
3) In a Bitcoin-enabled world, we are free to focus on things we value and love.

Proof-of-work goes beyond a mining algorithm and, at its core, applies capitalism to one’s daily life. Value is not being properly recognized in the current world—a talented coder in Kenya is being paid way less than her peer in San Francisco; a minute of your time on an evening with family is not economically recognized the same as a minute of your time waiting for the metro. Bitcoin solves this: not only by seamlessly transferring monetary units, but also by having marketplaces for everything to the nanosecond, so that value is recognized and exchanged in real-time. It opens up a world to true fairness—fair opportunity to gain access, compete and be rewarded. To excel in the Bitcoin-powered economy, one needs to continuously provide value that is useful to others. You will only be judged by your work, not your background, not your history.

Bitcoin, as an immutable data ledger, will record achievements and actions to hold people accountable—from your academic degree, to if you litter in the street, with privacy. You are held accountable for your behavior and it will become increasingly easy to prove if someone is lying, cheating or committed crimes. The world will become a better place with integrity and authenticity.

As Bitcoin enables value recognition for everything, your 9-to-6 job no longer becomes the only source of income. While it unleashes the productivity and creativity of 7 billion people, it frees up your time and space to focus on things we value the most – being live in nature, spending time with family etc. Everyone gets to provide value in their own unique way and gets rewarded by doing so.

We’d like to thank Ella Qiang for taking the time to speak with us. For more information, follow her on Twitter, or check out the CambrianSV Bootcamp.

During our Let’s Build Bitcoin Together! pledge, we want to give away all 1,000 BTC. But we can’t make it happen without YOU. Each vote is worth 0.02 BTC, so cast your votes today!