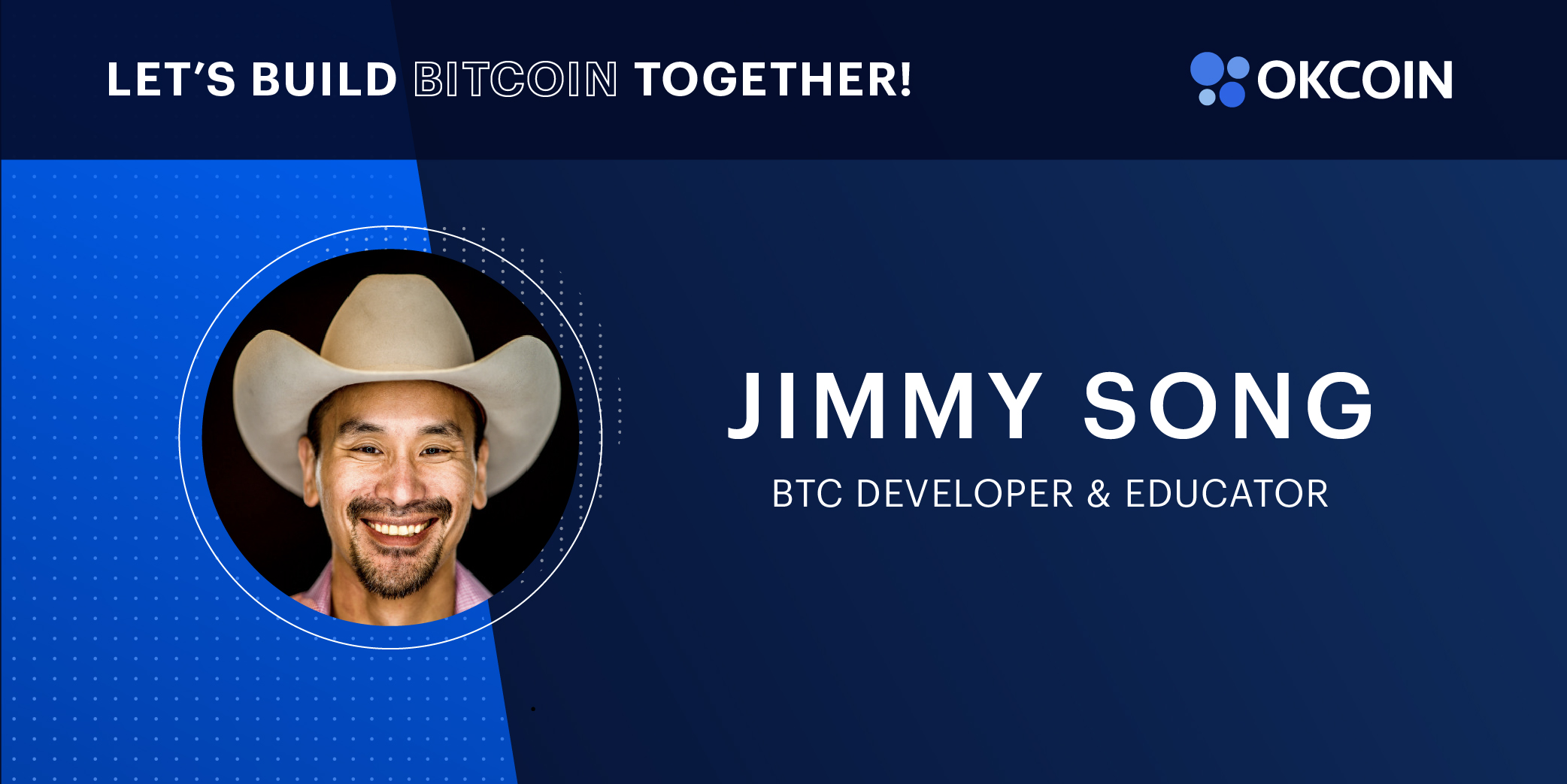 We are well into our Let’s Build Bitcoin Together! pledge: an up to 1,000 BTC donation back into the Bitcoin developer community. Between now and September 27, 2019, crypto enthusiasts can vote for the project they’d like to receive a donation; Bitcoin, Bitcoin Cash, or Bitcoin Satoshi’s Vision. For each vote received, OKCoin will send 0.02 BTC to the respective project. We sat down with Jimmy Song, one of the Bitcoin Core developers supported by our pledge, to discuss his vision for BTC and the larger crypto ecosystem. He is an author, educator, and self-described “Bitcoin Expert Witness.” is also a lecturer at the University of Texas and a venture partner at Blockchain Capital. We talked through his project and got his unique take on BTC and the fate of civilization as a whole.

Can you tell us a bit about your background, and how you first got involved in the crypto space?

I got into Bitcoin in 2011 when I first read about how it had broken $1. I tried to buy some, but it was too complicated back then. Then, in 2013, I began working as a developer on some Bitcoin open source projects.

Why are you excited about Bitcoin Core?

It secures value for millions. Sound money leads to prosperity.

How will you use the donation money you receive to build BTC?

I plan to use any donation money received to train more developers through scholarships in my program, Programming Blockchain.

You’ve written a book on bitcoin programming, and created an educational course for developers who wish to contribute. What is your vision as a bitcoin educator?

My vision has always been to make the developer ecosystem more robust. If we want more and better things in Bitcoin, we’re going to need more developers to make that happen.

You’re known for being a bitcoin maximalist and a blockchain skeptic. In your view, does blockchain make sense for enterprise applications?

No. Blockchains for enterprise are always overpromising what blockchain technology can do. It was custom-built for Bitcoin—it doesn’t make sense for anything else.

You’ve been quoted as saying, “the next major evolution in Bitcoin is not technical, but behavioral.” Can you explain what you meant by this?

A lot of people need to learn personal responsibility and storing their own keys, and so on. This is the behavioral evolution that I see coming. Our modern world outsources a lot of our responsibility, which is at the root of many problems we have (fiat money, authoritarian control, etc). Bitcoin helps teach people how to be self-sovereign. That’s what I see.

Some of the core ideas behind cryptocurrency include decentralization and anonymity. Do you see these principles persevering as mainstream adoption and corporate involvement increases?

Yes! I believe self-sovereignty is something people innately want. I don’t see the mainstream or corporations being able to influence those principles, or Bitcoin, much, compared to the other way around.

What is your main hope for the future of BTC, and cryptocurrencies as a whole?

I hope that cryptocurrencies will inspire people to start building up civilization. There’s a lot of rent-seeking due to easy money. Putting a stop to that would benefit us all, and stop the decline of civilization.

We’d like to thank Jimmy Song for taking the time to speak with us. For more information, follow him on Twitter or visit his blog. You may also purchase his book Programming Bitcoin: Learn How to Program Bitcoin from Scratch here.

During our Let’s Build Bitcoin Together! pledge, we want to give away all 1,000 BTC. But we can’t make it happen without YOU. Each vote is worth 0.02 BTC, so cast your votes today!

As part of our Developer Grant Program, we contributed $150,000 to Brink and Gloria Zhao to support her open source work. Learn more about h...