What is BTC? A Bitcoin Primer 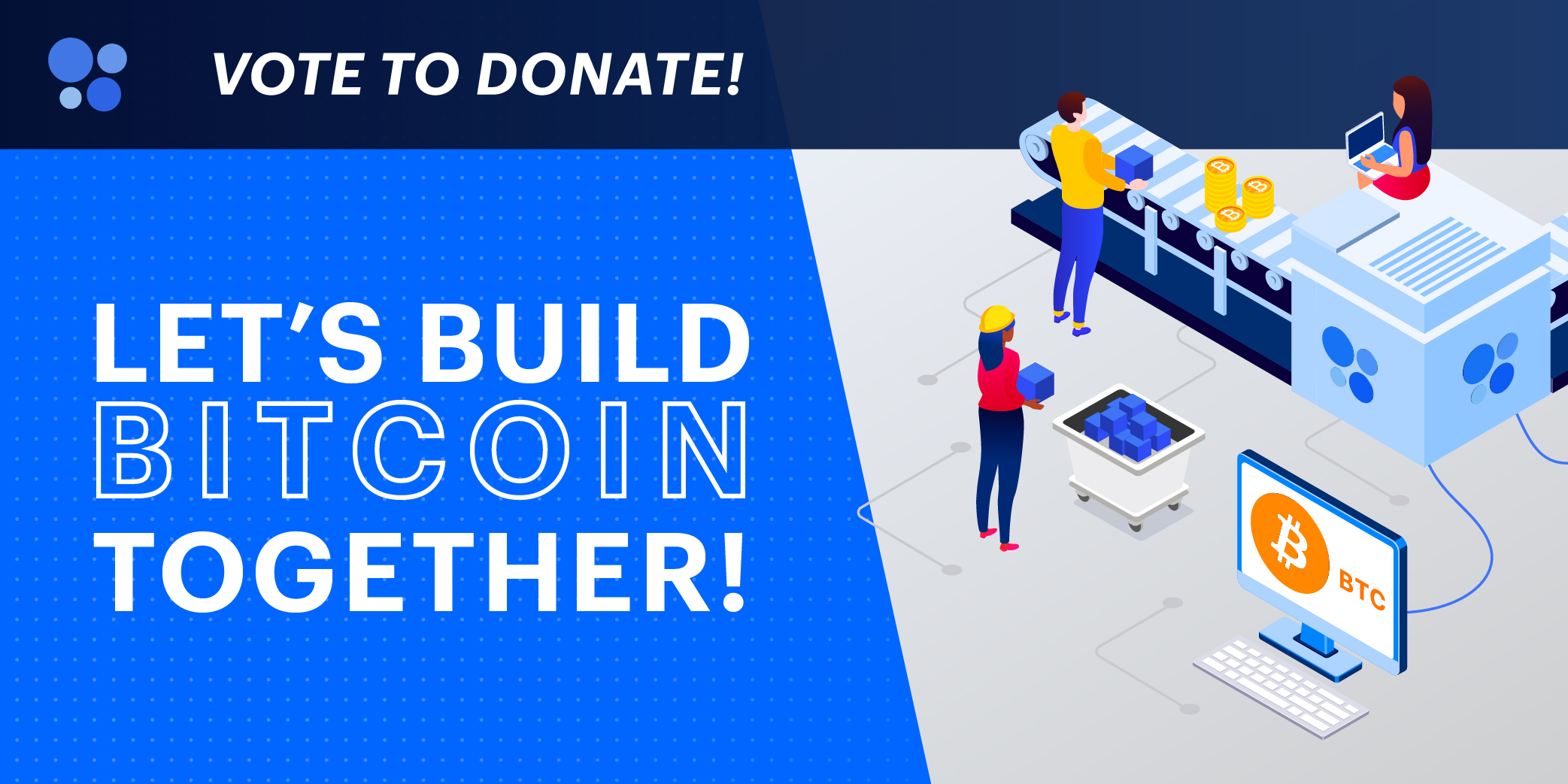 What is BTC? A Bitcoin Primer

In celebration of Let’s Build Bitcoin Together!, we’ve created a blog series that will delve into the history and vision behind the three cryptocurrency projects being supported. We hope the following post will provide background and inspire our community to get out there and VOTE for the project they want to see the donation go towards. So, without further ado, let’s build bitcoin together!

What is Bitcoin (BTC)?

Even if you’re new to the world of cryptocurrency, you’ve likely come across the world’s most well-known, Bitcoin. But what is BTC, exactly?

First off, BTC is shorthand for bitcoin, used similarly to ticker symbols in the stock market. It’s how you’ll see bitcoin listed on cryptocurrency exchanges and in business articles. But beyond its nomenclature, what is bitcoin? Put simply, it’s a digital asset that functions as a store of value or medium of exchange. Bitcoin was created in 2008 and first mined in 2009, making it the first and most proven cryptocurrency today. It was envisioned as a “peer-to-peer electronic cash system” that did not require a thirdparty intermediary. Bitcoin developers continue to build towards that goal and advocate mass adoption.

It’s important to note that, since its inception, bitcoin has experienced a number of hard forks. BTC remains the most widely supported, capturing over 95% of the bitcoin market value and ; however, there is a contentious ongoing debate over which is the “true” bitcoin. Other popular contenders include Bitcoin Satoshi Vision (BSV) and Bitcoin Cash (BCH).

Though the value of BTC has fluctuated quite a bit over the last couple of years, it’s the most valuable cryptocurrency by far. To guard against inflation, there are a limited number of Bitcoins available. People may accrue BTC by “mining” tokens using dedicated hardware, or by purchasing it through a crypto exchange, like OKCoin.

Bitcoin is based on a distributed public ledger called a blockchain. In fact, Bitcoin’s ledger was the first blockchain, but now the technology’s uses have expanded considerably. All transactions are recorded on the blockchain across a decentralized network of nodes. This decentralized nature is what makes BTC, and cryptocurrencies in general, an appealing alternative to government-issued fiat currency. While the finance industry has a history of breaches stemming from putting trust in a single organization, Bitcoin’s public ledger is maintained by a secure global network of thousands of nodes that, as of today, has not been compromised.

A Brief of BTC

There’s a bit of mystery surrounding the creation of Bitcoin due to the pseudonymous nature of its creator, Satoshi Nakamoto, who’s true identity is still unknown. Regardless of Nakamoto’s actual identity, Satoshi published a white paper on Bitcoin in 2008 and mined its first block in 2009. The first BTC transaction occurred in 2010: 10,000 BTC for two pizzas.

Bitcoin spent a couple of years being the currency of choice in black market transactions like those on Silk Road before reaching more mainstream usage. Each bitcoin was worth 770 USD at the start of 2014 and reached a high of 19,783.06 USD by December 2017.

Unfortunately, in 2018, BTC plunged during the infamous crypto winter, losing more than 70% of its value, which caused naysayers to predict its doom. Those bleak forecasts, thankfully, were incorrect; though BTC hasn’t reached its 2017 peak yet, it has steadily bounced back throughout 2019. As of this writing, BTC has surged over 170% in 2019 to around $10,000 USD.

We’ve referred to “mining” BTC several times now, but let’s expand on what that means. Bitcoin miners use computers to compete and solve highly complex mathematical equations in order to append the next block to the blockchain and win a reward – freshly minted BTC. This requires a lot of power, so it’s not something that can be done with the average PC. Also, though this varies, the chance of mining a block on the Bitcoin chain is around one in six trillion — not exactly a one-and-done transaction. To account for this, miners usually pool their hash power to process these equations simultaneously and increase their chance of winning a block reward.

As you might imagine, Bitcoin mining is extremely competitive, which is part of the reason the process has become so technically demanding. One block is mined about every ten minutes, and if you’re not the first, you need to move on to the next block. With only 21 million Bitcoin in existence, supply is limited and shrinking every day.

If this sounds like a difficult and complicated process, that’s because it is. That’s the hard way to acquire Bitcoin; it’s more straightforward to use a reputable cryptocurrency marketplace and simply exchange BTC for fiat (such as USD) or other cryptocurrencies.

The Development of Bitcoin

When the original version of Bitcoin was released in January of 2009, it was only Windows supported. It was followed by minor bug fixes, and by the end of that year, a Linux-supported version was released. In version 0.3.2, Nakamoto added checkpoints as a safeguard. He soon disappeared from the project and its forums, following the release of version 0.3.9.

Fortunately, the developer community rallied around Bitcoin and continued to build.  Bitcoin-Qt version 0.5.0 was released on 1 November 2011. This version included a front end interface that leveraged the QT user interface toolkit. Following this, developers switched from Berkeley DB to LevelDB in the 0.8 release to reduce blockchain synchronization time. This resulted in a minor fork in March of 2013, which was then shortly resolved. In version 0.8.2, seeding nodes through internet relay chat (IRC) was discontinued. In version 0.9.0, the software was dubbed Bitcoin Core and default transaction fees were reduced by 10x to encourage microtransactions. Version 0.9.1 followed this, released to mitigate susceptibility to the heartbleed bug: a serious vulnerability in openSSL cryptographic software library.

Version 0.10, released to the public in early 2015, introduced a consensus library. 2015 was a big year for Bitcoin development, as this fascinating visualization illustrates. Following this, developers introduced version 0.11.2 which allowed transactions to be made unspendable until a designated time. In April of 2016, version 0.12.0 was released, making it possible for multiple soft forks to occur at the same time. In August of that same year, version 0.13.0 was released through the combined efforts of nearly 100 developers.

In October of 2016, the SegWit soft fork was featured in the 0.13.1 release. This protocol aimed to address the Bitcoin scaling issue by optimizing the blocksize. It aimed to place downward pressure on transaction fees while increasing the maximum transaction capacity of the overall network. Ultimately, the activation of SegWit occured in 2017, involving much controversy and debate, and sparked the “User Activated Soft Fork (UASF)” movement. Today, many wallets still have yet to add SegWit support, with about 40% of network transactions SegWit enabled. The activation of SegWit also enabled layer two networks like Lightning, which has been in beta since early 2018.

The 15th generation of the software, released in 2017, altered how the blockchain is stored. All subsequent variations use a chainstate or “UTXO-set” saved in a dedicated database. This version also introduced a replace-by-fee toggle in the user interface and multi-wallet support.

The latest major Bitcoin Core version released was 0.18.0, in May 2019. It included bug fixes, performance improvements, and updated translations. If you’re looking to upgrade, you can do so here!

The Present and Future of Bitcoin

Bitcoin has come a long way in its relatively short period of existence. These days, financial institutions, businesses, and governments have begun to see it as more than an experiment. In fact, BTC now facilitates real-world transactions every day: it is accepted by online retailers like Overstock, travel booking websites, videogames, and tech product retailers, and more. It’s used throughout the world by savers looking for a trustless permissionless store of value, financial institutions as a trading instrument, as well as individuals in day to day transactions, fulfilling its promise as a global decentralized currency.

Bitcoin has been a driving force in making crypto more mainstream. Even less tech-savvy people are likely to have at least heard of it, even if they don’t fully understand the blockchain and mining processes. Bitcoin has now been joined by a slew of newer currencies, including its own forks in the chain, Bitcoin Cash (BCH) and Bitcoin Satoshi Vision (BSV). While each of these projects has its own specific goals, they share the same vision: to build the crypto ecosystem, drive mass adoption of digital assets, and support new blockchain applications.

No one can predict the future, but some analysts believe BTC will be more widely used in the next few years. It’s particularly useful in countries in which the local currency fluctuates or is subject to severe inflation. Due to its decentralized nature, Bitcoin isn’t subject to the whims of any single government or institution. With the unveiling of Facebook’s crypto asset, Libra, governments have been debating more comprehensive regulations which may facilitate broader adoption.

Learn how buying a little at a time helps you control your average price for bitcoin and other crypto assets. What is dollar-cost-averagi...

Why it pays to Earn

Learn more about how you can earn interest on your crypto assets, easily and safely. What is Earn? Earn is an Okcoin feature allowing ...

Stacking STX to earn BTC rewards — everything you need to know