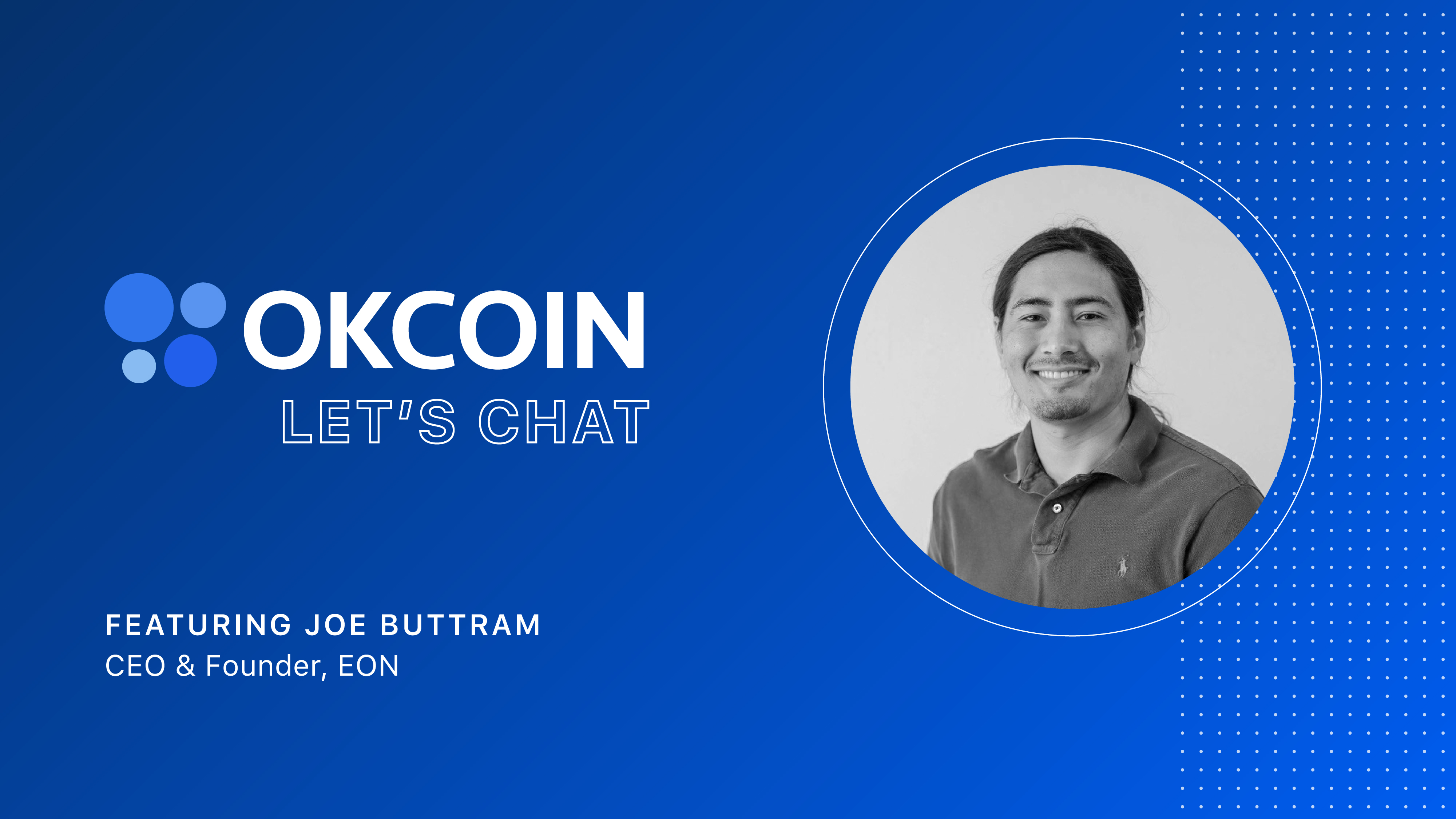 OKCoin’s OK Let’s Chat podcast is dedicated to showcasing unique voices in cryptocurrency, but Joe Buttram is a particularly fascinating case — we’re unlikely to have another former MMA fighter on our show! Our discussion with Buttram, however, focused on his crypto expertise, his digital asset platform EON, the importance of staking economies, and why crypto libertarians are slowly coming around to centralized exchanges.

Although to be fair, we did briefly discuss his MMA experiences. How could we not?

Yes, there are parallels between crypto trading and MMA fighting

Prior to founding EON, Buttram had a career in mixed martial arts, where he trained under several professional UFC fighters. He’s since transitioned to cryptocurrency investments and co-founded the EON staking platform, but he still sees parallels between the disciplines — especially when it comes to self-ownership.

“When you’re playing professional sports — especially on an individual level — the buck stops with you. And if you don’t perform, the whole world is watching, and it’s very evident,” Buttram said. “With trading, it’s the same thing. If you perform a bad trade, it goes against your way; you don’t really have anyone to cry home to. On top of that, there’s the mental fortitude — having the stomach — to sit through the volatility in the space. Particularly when you’re holding for long periods of time and having conviction in what you’re trying to do.”

Buttram has met professionals across MMA and crypto spaces who were confident and capable of their abilities. Get them alone before a major event, however — be it a fight or market fluctuation — and they’ll be as nervous as anybody else. This is what taught Buttram that fear is a perfectly normal trait, and having the fortitude to see it through is what creates opportunities for success.

“What separates people is whether you go through with it and bite the bullet, or just not do it,” he continued. “If you were to freak out every time the price fell, you would lose all your money. You have to be able to sit through those moments … all the gains happen in a very short amount of time, same as the losses. You have to stick through the hard times because the good ones will come just as quickly.”

Crypto is changing rapidly and will continue to do so

Buttram has worked in cryptocurrency markets for years, both as an investor and a digital asset platform founder. During this time, he’s seen remarkable changes take place, and expects that further dramatic shifts are on the way.

“A year and a half ago … the climate was very fast and loose. Not that it isn’t today, but it was more so back then,” Buttram explained. “I would sit in internet chat rooms where people were tossing around $10 million with no contracts. And I didn’t think that was necessarily the future, particularly as more institutional money comes into the space.”

“Decentralization, especially with the large massive prices we have now, is super messy,” he continued. “The big out there, you get on their dev calls, and you have a million people saying a million things — there’s too many cooks in the kitchen.”

“I think what I’d really like to see from projects, particularly what will work for the future, is the groundwork being laid for proper incentivization models. Do you have sufficient market cap? Do you have sufficient liquidity? Are users engaged enough, and are they going to participate in the way you want them to participate? Personally, I think that’s the only way things are going to get solved.”

Of course, crypto evolution won’t stop here. As Buttram details in the full podcast, he’s predicted most small blockchain projects won’t exist within five years — largely because they don’t have enough liquidity to secure development. Another shift on the horizon is the rise of corporate engagement. Soon, major companies like Facebook will bring new tokens to market, transforming the space dramatically.

Crypto regulators are people too

New cryptocurrency regulations seem to emerge every month, progress which Buttram believes is necessary and inevitable. “I do think legal and regulatory [progress] is very important, particularly in the United States. The lack of clarity and regulation by enforcement isn’t healthy, but I do see it as a natural effect of the space moving so quickly and growing as it has been.”

Buttram hasn’t always agreed with regulation. Like many cryptocurrency veterans, Buttram holds strong libertarian views that are traditionally opposed to government oversight. In recent years, however, Buttram has accepted that regulation can help cultivate the crypto ecosystem. He now feels that the relationship with regulators doesn’t need to be adversarial.

“I hold my libertarian values very close to my heart, but we do live in a world where big government is around. Being able to interface with them and build a good framework moving forward is going to be very powerful. At the end of the day, the government is people too. And I was pretty surprised at how accessible they were. It’s going to take time, but we have to build those relationships, an ecosystem, and a community in order to get favorable treatment. Because if we don’t do it, who else will?”

We’d like to thank Joe for taking the time to speak with us! Be sure to subscribe on iTunes or wherever you get your podcasts.

Bitcoin Moves #12: Volatility Ahead as ~$1B BTC Options Expire

In the past week bitcoin has gained further attention as a store of value amid concerns about increasing inflation and fears that the US dol...

OKCoin is one of the first licensed exchanges to support UNI with a USD pairing along with BTC airdrops for customers who trade DeFi assets ...

DeFi This Week: 4 Things You Need to Know